D'ERRICO, D. - Glossy tools innovations in the method of interpretations of use-wear produced by plant processing

There is an emergent scholarly interest in the use of optical metallurgical microscopes to rercognise and define morphological features of wear traces produced by plant processing on stone tools.  Plant processing experiments have helped identify specific characteristics of micro-wear resulting from cutting different types of plants (Gassin 1993, Jensen 1994, Van Gjin 2010). The author of this thesis carried out analyses on wear traces produced by siliceous plants (Poaceae), reeds and other herbaceous plants, focusing specifically on the glossy produced by a specific plant (Clemente and Gibaja 1998, Ibanez et al. 2008, Jensen 1994, Van Gjin 2010).

Experimental data were compared to find out existing differences and to recognize wear traces on the archaeological material. The morphological features considered for defining a specific a trace are usually texture, topography, brightness and weave. The way these features combine defines a specific wear linked to a specific activity. It is important to notice that in an archaeological environment difficulties in reading may often occur, due mainly to the conservation status of the lithic instruments. Poorly developed traces can lead to inaccurate assignments because the characteristics, if not fully developed and recognized, may lead to several different interpretations.

I recently carried out experimental research to analyse a wide range of possible wear traces caused by cutting of plants (D'Errico 2011). I considered wear caused by both domestic and wild cereals, reeds, siliceous grasses and wooden plants to identify patterns related to the exploitation of different types of plants over different periods of time.

I made comparisons between the wear produced by such activities on modern reproductions of lithic instruments and archaeological materials coming from the Neolithic contexts of Masseria Candelaro (Puglia, Italy) and Çayönü (Anatolia, Turkey). In the following paragraphs I explain the methods adopted and show the results of this research.

Several flint instruments were produced to test wear after different periods of specific activity, from six to two hours. I considered the development of the wear in the following different areas of the tool:

This topographic categorisation allows detecting variations in the distribution of use-wear within three specific areas, with particular characteristics related to the worked material and the time of use.

The effectiveness of this method of investigation is especially evident in comparing wear traces in their early stage of development.  In particular, the retro margin area shows only a light polish in the early stages of formation. I introduced the term tending (for example ->smooth o ->flat) to indicate a stage where the polish does not present both a fully developed texture and topography, but tends towards a specific morphology. 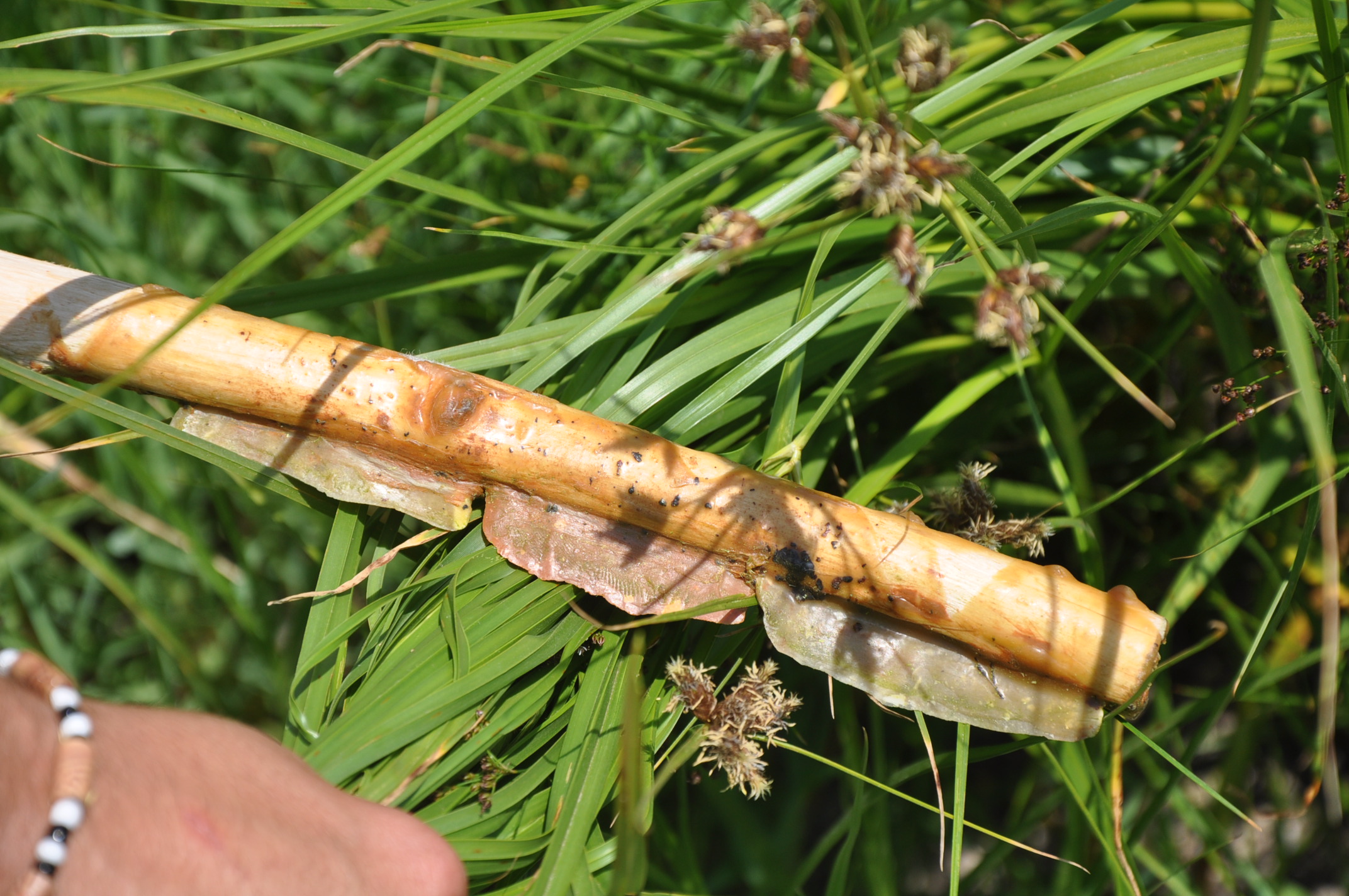 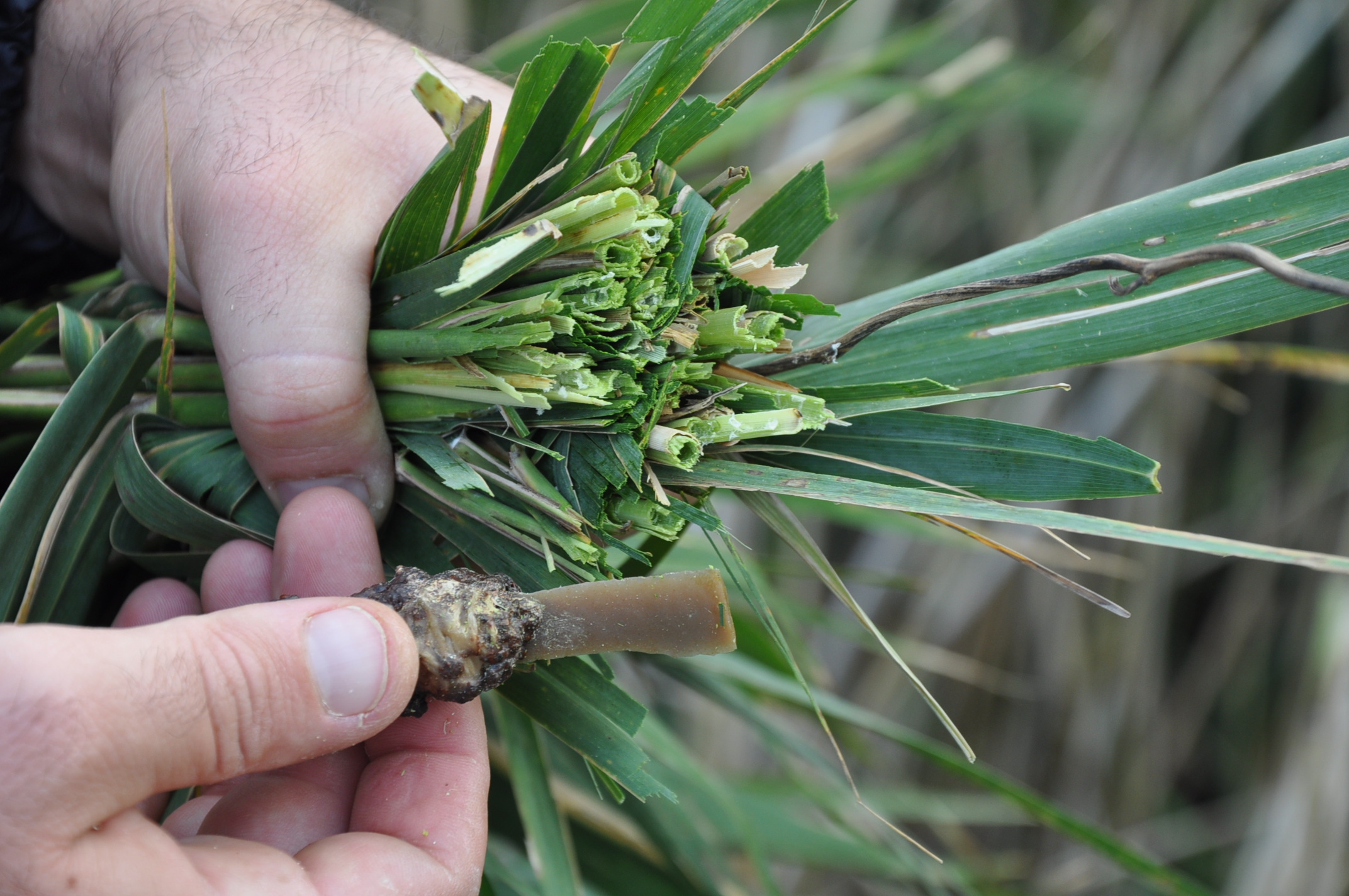 RESULTS OF THE ANALYSIS

Tools used for cutting reeds (Phragmites australis) for over two hours (Tab. 1, Figs. 3 and 4) show a band of little developed polish in the marginal area of the edge. By moving slightly to the inside area, this band disappears and develops a particular polishing ->smooth present only on high points of the surface displaying a grill pattern weave. On the other hand the inner area is affected only by a widespread brightness, while no particular changes can be noticed on the surface.

Tab. 1 - Description of development of polish by reeds (2h) in three different areas of the surface. 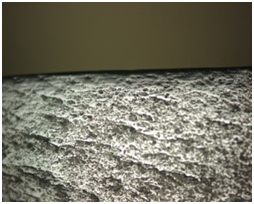 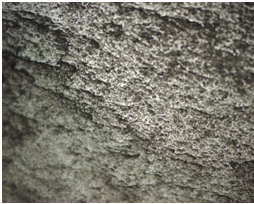 After five hours of use there is an accentuation of polish features in the margin area that presents itself still as ->smooth and ->flat with a much more tightened weave, while in the inner margin area a grill pattern weave is still present with a smoothing of the high points affecting also the lower areas (Tab. 2, Figs. 5 and 6). In the inner area only a diffused brightness can be noted.

Tab. 2 - Description of development of polish by reeds (5h) in three different areas of the surface. 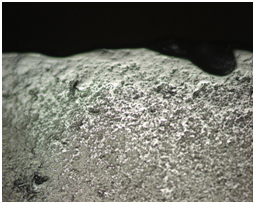 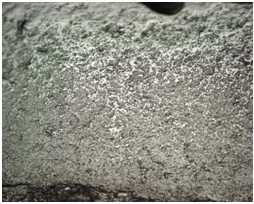 After six hours of use (Tab. 3, Figs. 7 and 8), the wear looks highly developed in the margin area, presenting a smooth texture with accentuated characteristics, but it is still not a compact and continuous band of polish, as the one produced by processing cereals. In the retro margin area the presence of grill pattern weave with rounded high points remains constant  and the lower parts of the surface appear only slightly affected by the polish, while in the inner area a slight rounding of the high points as well as a diffused brightness emerge.

Tab. 3 - Description of development of polish by reeds (6h) in three different areas of the surface. 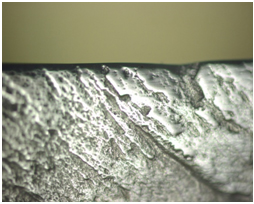 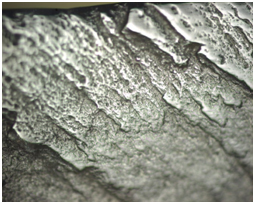 The main feature of the polish caused by cutting reeds is thus the smoothing of both the margin area and the retro margin area which are easily distinguishable from the remaining surface which instead appears rough.

Cereal processing wear look different indeed. It shows smoother and flatter features with a tighter weave than the one produced by reeds processing (Tab. 4, Figs. 9 and 10).  Although a compact and continuous band of polish is absent in both cases, the polish related to cereals is different for it affects also both the immediate and retro margin area.

Differences between reeds and siliceous plant processing can be summarized as follows:

1. After six hours of use, polish due to siliceous grasses shows smoother and flatter characteristics and a tighter weave if compared with the one due to processing reeds.

An important result of the study is related to the distinction between wild and domestic cereals processing wear. Wild cereal processing produces a similar texture of polish only in the margin area, and differs from domestic cereal processing for the presence in the retro margin area of a slight rounding of the high points of the surface. Besides, traces left by wild cereals usually show a less developed polish. Such a difference could be caused by the different quantity of water present in the stem of wild and domestic cereals. The formers, did not have a constant supply of water and are more prone to stress caused by aridity (Celant and Lemorini p. c.), while the latter had more frequent access to water.

Tab. 4 - Comparison between polish due to the cutting of reeds, grasses and cereals. 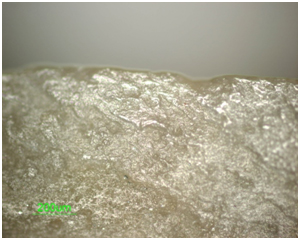 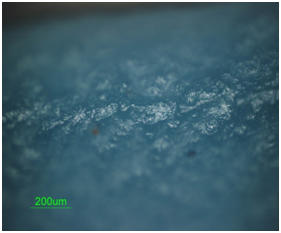 The study of the distribution of micro-wear on different areas of the surface of lithic instruments reveals important differences in the past use of plants and specific behavioural patterns related to them. To improve and test this method of investigation, further tests are required in order to recognise wear behaviour on a diachronic dimension, taking into consideration a large sample of plants that could have been exploited in specific areas in different periods. This approach in some cases could lead to the identification of both the processed materials and the tool's duration of usel. This would be essential for the reconstruction of patterns related to the exploitation of plant resources.

Clemente, I. and Gibaja, J.F. (1998) Working processes on cereals: an approach through microwear analysis. Journal of Archaeological Science, 25, 457–464.