PROFFITT, T. and ZUPANCICH, A. - Macro and microscopic wear analysis of the non-worked lateral edge of a large biface

The paper illustrates the results of an experimentation undertaken to test the hypothesis that characteristic wear is accrued on the non worked lateral edge of a stationary partially buried handaxe. The work involved the production of a large biface and its use as a stationary object resting on surface made up of sediment. At this point, the authors carried out a macro and microscopic wear analysis of the non-worked lateral edge.

PRODUCTION OF THE BIFACE

A large biface was knapped from fine grained flint - coming from Suffolk (England, UK) -  using hard hammer percussion only with a quartzite hammer-stone. In order to achieve the large dimensions needed for the experimental design it was decided that large nodular flint would be used as opposed to large flakes.

The core was simply reduced through the bifacial removal of large flakes, with a constant left to right rotation of the core. This produced a sharp cutting edge across the entire circumference of the biface. 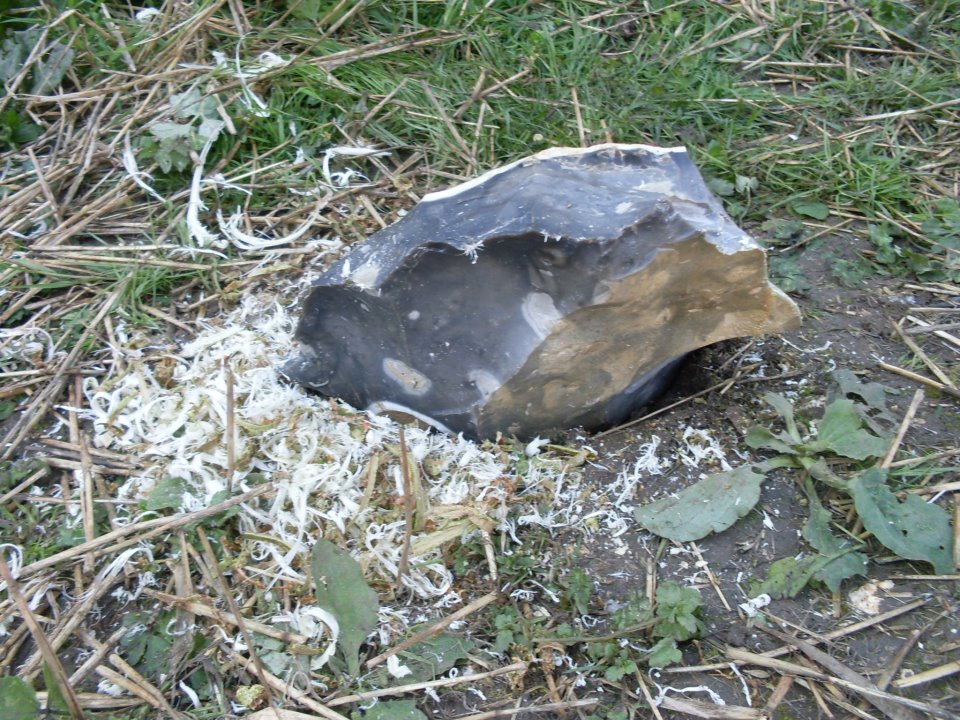 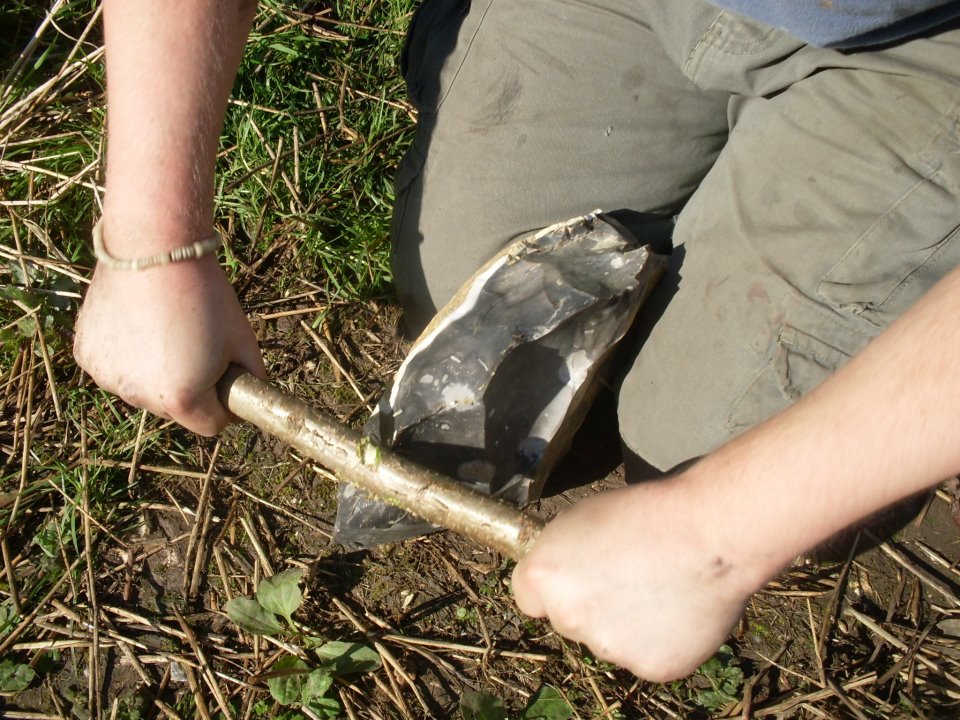 The experiment was conducted on moist fine grained sediment, with moderate flint and chalk inclusions. The ground was prepared through the removal of all organic debris, such as grass, wood, as well as any large flint fragments. The biface was placed on a clear surface with no attempt to burry the edge in the sediment. The biface was stabilized between the knees so as to hold it in place during use.

A total of ten hazel branches with an average circumference of 2.5cm were worked. Two different activities were undertaken on the working edge of the bifaces: chopping of and removing the bark from the hazel branches. In total the bifac was used continually for two hours. During this period no attempt was made to stop the biface from becoming buried in the ground due to use.

On the working edge, typical damage patterns associated to the working of medium hard materials, such as wood (Hayden 1982;Semenov 1978) can clearly be seen. The edge is characterised by the presence of small (< 2mm), close step scars. In several cases these are overlapping, while most of the times their disposition is regular and their orientation is perpendicular.  In addition, an overall light rounding characterise the working edge of the object. 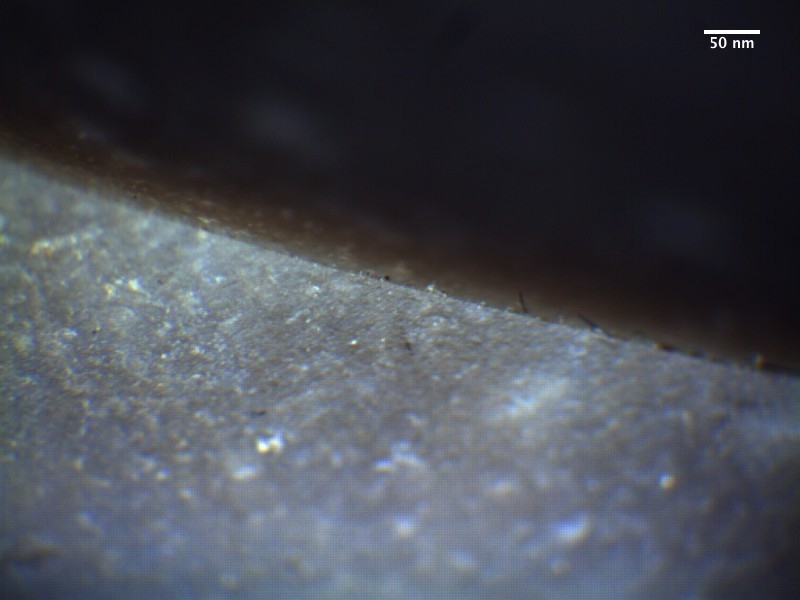 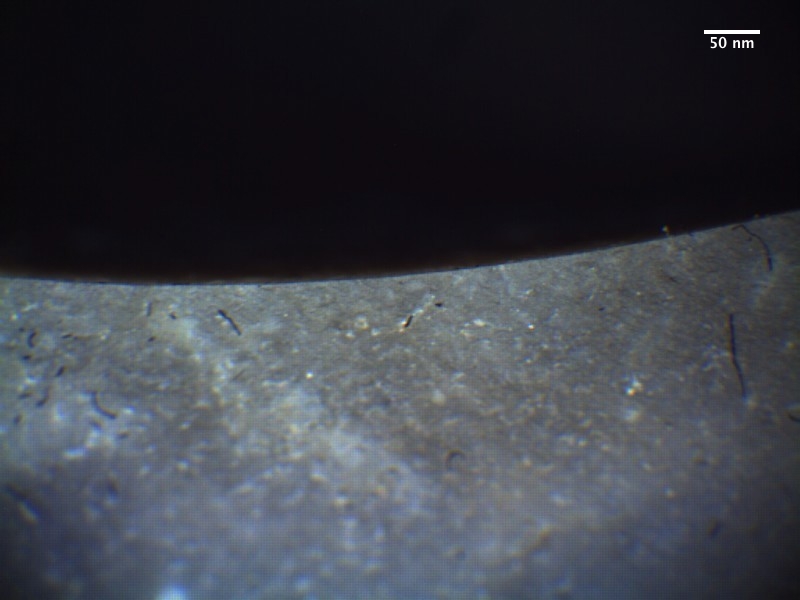 On the other hand, however, the majority of the non-worked edge, in contact with the sediment shows a significant degree of snapping as visible on figure 6. This type of damage is represented along most of the edge and is frequently in accompanied by a medium degree of rounding. 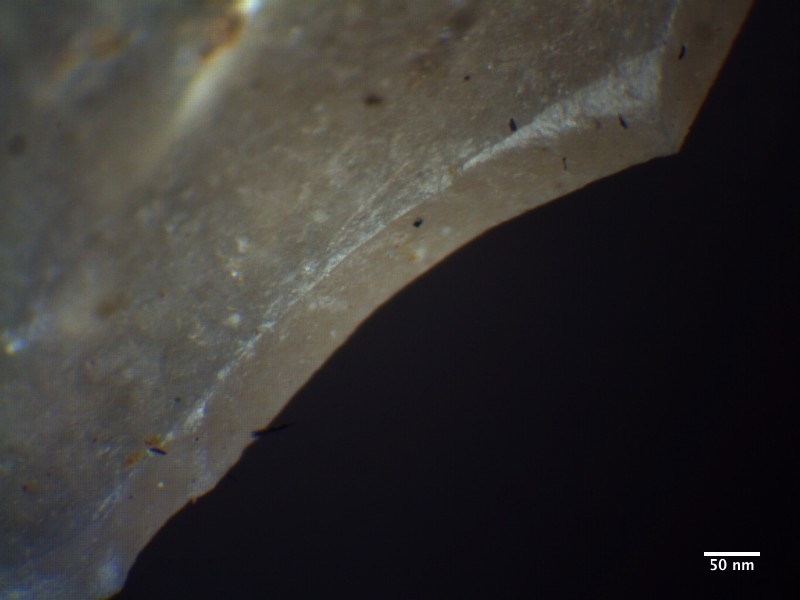 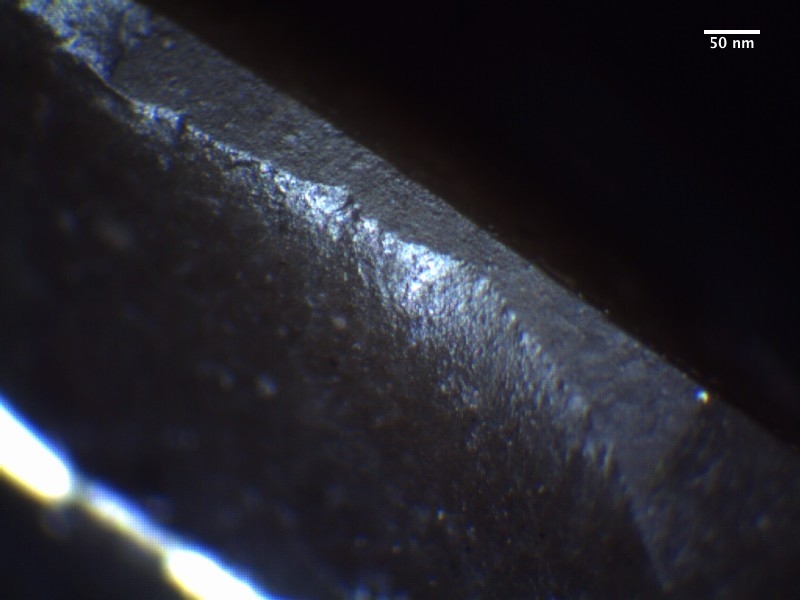 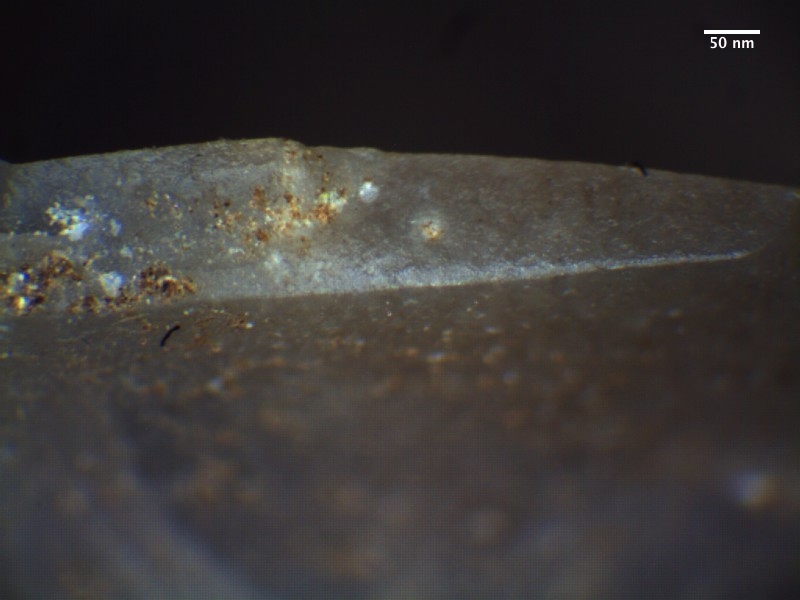 This study has confirmed that specific types of wear occur on the non-utilised edges of a biface when used as stationary objects. Furthermore, a high degree of efficiency has been noticed in the use of the object as a fixed element.

These results do not allow the identification variation in hominin tool use, nor does it offer a definitive classification of wear patterns associated with fixed biface use.

This study should be taken as a preliminary step towards understanding the different wear patterns associated with this behavior. A great deal of further experimentation is required, where a wider range of material is worked, on a wider range of sedimentary layers. Further to this, a greater number of bifaces of differing sizes must be tested, and finally, similar patterns of wear must be sought in the archaeological record.

Semenov, S.A. (1964) Prehistoric Technology: an experimental study of the oldest tools and artefacts from traces of manufacture and use. London: Cory, Adams & Mackay.