The expansion of the railway line from Caserta to Foggia, in the section between Borgo Cervaro and Bovino in the province of Foggia, has led to the opportunity to carry out archaeological investigations along an extended part of the track. Many previously unknown sites have been identified along this new line. Among these, one, dating between the end of the Early and the beginning of the Middle Bronze Age, was selected for excavation in the locality of Posta Rivolta in the comune of Foggia (Catastale Foglio 211, particelle 49-264; geographical coordinates WGS84 GMS: North 4578232.6479 - East 2565374.4246).

The excavation, which covered an area of approximately 106 x 43 m, has resulted in the discovery of a large village consisting of at least four large huts (Fig. 1 - numbered 1-4). The interiors of all four structures contained hearths and surfaces for the preparation and cooking of food, while three enchytrismos burials were found outside two of them. 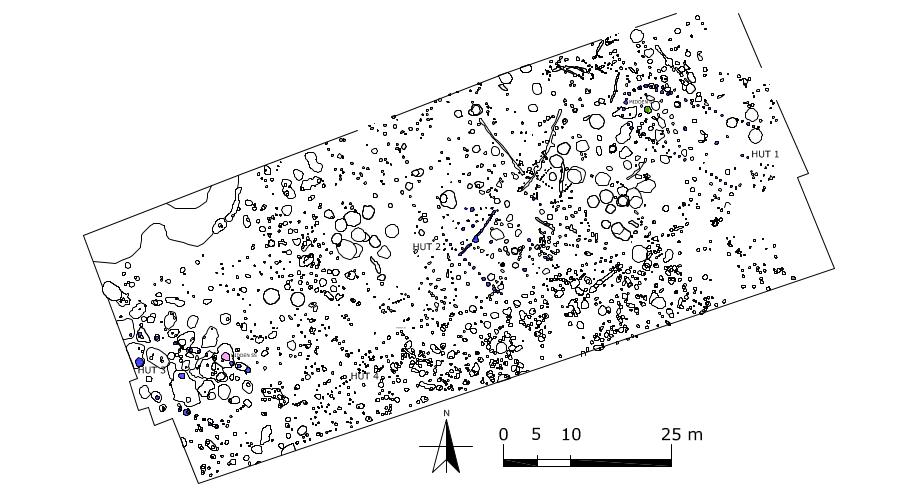 The open space located between the huts was used for artisanal activity. This is evidenced by the presence of kilns for the production of ceramics, middens and smaller structures made of perishable material (Tunzi, et al. in press). This pattern, with huts spaced with ample distance for production activities between them, suggests an organisation of space similar to that at sites such as Gricignano (Albore Livadie et al. 2003: 127).

THE DESTRUCTION OF HUTS 1 AND 3

Among the four structures discovered, two are worth paying closer attention. Huts 1 and 3, which lie at either end of the area under investigation, were found to be very similar in their typological and dimensional characteristics. Their stratigraphic record also indicates that they saw similar phases of destruction/abandonment.

Hut 1 was an apsidal structure, oriented along a NW–SE axis, covering a total area of 20.50 x 7.80 m. Its primary entrance was identified by the absence of postholes on its SE side, while a smaller entrance (2.30 m) was located midway along its western wall. On the interior of the hut, four postholes were oriented along the central axis, supporting a peaked roof (for a more detailed description of the structure see Tunzi, et al. in press). A hearth that had several stages of use was located near the north-eastern wall, while a small midden (Pit 52) was found near the main entrance. This deposit contained numerous fragments of carinated cups and bowls similar to those from contexts dating to the Palma Campania facies (Cf. Types 1 and 2 of Pratola Serra - Talamo 1992: Plates XXXVII - XXXIX).

The perimeter postholes of the hut were similar in their dimensions: their profiles were identical, and their depth consistently greater than 50 cm, significantly deeper than other postholes found nearby. The holes on the southern side of the structure seem to have been placed at regular intervals, while on the northern side they were seen to be more irregular, and in some cases accompanied by other holes that attest to the probable rebuilding of this part of the structure following its collapse.

All of the postholes, both on the perimeter and within the structure, have yielded a quantity of large fragments of baked clay with the impressions of materials used in the construction of the wall (incannucciata), as well as fragments of ceramics, small river pebbles, and various other debris.

Among these, Pit 67 is the result of the enlargement of one of the central axial postholes. Inside three distinct layers of fill with traces of burning, well-preserved fragments of incannucciata, fragments of pottery and numerous fluvial pebbles were contained. Although archaeologically it has been possible to distinguish three different layers based on the presence of distinct concentrations of materials, analysis has shown that they belong to a single depositional event. Vessel forms can be partially reconstructed from the fragments of pottery in all three layers: these consisted primarily of medium and large-sized closed forms. Especially prevalent were both biconical and ovoid jars, with out-turned rims, vertical ribbon-shaped handles and cord-style relief decorations on the exterior of the vessel.

The presence of fragments which would constitute at least one-fourth of a vessel indicates that the filling of the posthole was intentional. Furthermore, on account of their deformation, cracks, and colour variations, it seems that many of these vessel fragments would have been refuse from ceramic production. This would also mean that ceramic production continued, despite the abandonment of the facility.

The large fragments of incannucciata and of the related materials that came from the fill of the other postholes in this hut are connected to these developments, confirming that the destruction of the area was intentional.

This same process could be seen in Hut 3, despite the lack of a direct stratigraphic relationship with Hut 1. Located at the western limit of the area under investigation, Hut 3 was observed to have similar dimensions to Hut 1 (ca. 18 x 9.20 m) and an identical plan, consisting of an apsidal shape oriented along a northwest–southeast axis with an entrance on the south-eastern face and a central alignment of posts to support a peaked roof. Hearth 6, located in the north-western part of Hut 3, was indicated by the presence of a surface which had undergone prolonged exposure to heat. 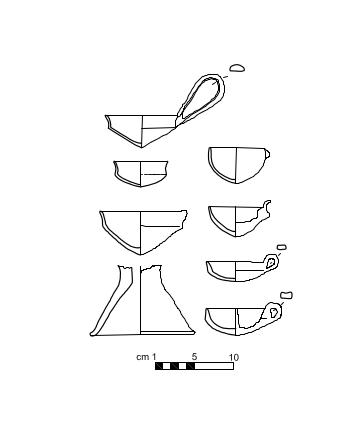 Immediately outside, however, Midden 55 (1.05 x 0.90 x 0.90 m) was formed within an expanded posthole, in which four different layers could be distinguished. These yielded several fragments of bone, fluvial pebbles, fragments of charcoals, and fired clay mixed with sandy soil. Although fragments from coarse-ware were present, the ceramic finds were comprised mainly of fine impasto with smoothed surfaces. These wares consisted of hourglass-shaped supports of fine craftsmanship, one-handled carinated cups with concave bottoms and carinated cups with cone-shaped bottoms and an elevated vertical handle (Fig. 2). Both of these types have a close affinity with examples from Ariano Irpino - La Starza (Trump 1963; Albore Livadie 1996). Also of note is the discovery of fragments belonging to a little jar with digital impressions on the rim, a vertical elevated handle, and small bosses just below the rim.

As in Hut 1, the central axial postholes of Hut 3 were enlarged and filled with material predominantly composed of vessel fragments, at the same time as the structure was going out of use. Pit 69 (1.04 x 7.1 x 1.07 m) contained parts of two truncated cone-shaped situlae, one with an out-turned rim and the other with an indistinct rim, which bear a close resemblance to types from Pratola Serra (Talamo 1992: Plate XL). It also contained numerous fragments of over-fired pottery, the surfaces of which were malformed and cracked in the production stage. Their presence points to the continuation of ceramic production on the site after the destruction of the hut. Pit 68 (0.90 x 0.56 x 0.95 m) differed in that it contained numerous fragments of open-form vessels and part of a large dolium with a thickened rim and cord-shaped relief decoration.

The data presented above enable us to reach some preliminary conclusions that may serve as the basis for further research. The two contexts examined above constitute undoubtedly the best case study of the site, providing evidence not just for its phases of occupation and destruction, but also for its post-destruction reuse for other purposes.

The analysis of the data would indicate that the wooden posts of the two structures were deliberately extracted, probably for reuse elsewhere, as evidenced by the slight widening of the upper part of the posthole. Shortly thereafter, in order to continue using the area that was previously occupied by the two huts, all of the postholes were filled with materials discarded from ceramic production. The fills also contained fragments of incannucciata, probably salvaged from the collapse of the two huts and which were easily available from the surrounding area. Only for the postholes that were enlarged and reused as middens (Pits 67, 68, 69) is it possible to hypothesise a more prolonged period of use. Finally, it can be concluded that the area saw a subsequent phase of production, as evidenced by the presence of numerous fragments of over-fired ceramics.