The Bipolar technique is a knapping procedure which consists in striking from above a core or a nodule, which is placed onto another stone used as an anvil. The force of the blow produces a counter shock from the anvil, so that flakes are frequently detached from both ends simultaneously. Although there may be a little control over the flakes produced, bipolar knapping is a very useful technique, in particular when the cores are too small to be handled in hand. This technique has been utilised in many geographical and chronological contexts since 2.5 million years ago (Oldowan technocomplex).

The quality of this raw material varies greatly between fractured and unfractured cores. The cortex in this case is thin, originated by the fluitation of the stones.

DESCRIPTION OF THE EXPERIMENT

The experiment shows how the bipolar knapping produces useful supports and also how it can be used to break cobble stones in two in order to obtain cores. The two executors, Dr Maffezzoli and Dr Massussi, used different strikers and anvils. The choice of the anvil depends on a number of factors, such as the type of striker. The convex anvil has shown a greater efficiency. The power of the strike is concentrated in a smaller area, and the anvil itself generates a stronger and more precise backlash.

Typical diagnostic characters of the products produced by bipolar knapping are:

1) Two bulbs on the ventral face. One is generated by the first strike and the other by the anvil backlash. Parasite reflected flakes could be generated on the bulbs, as it can be seen in the picture below. 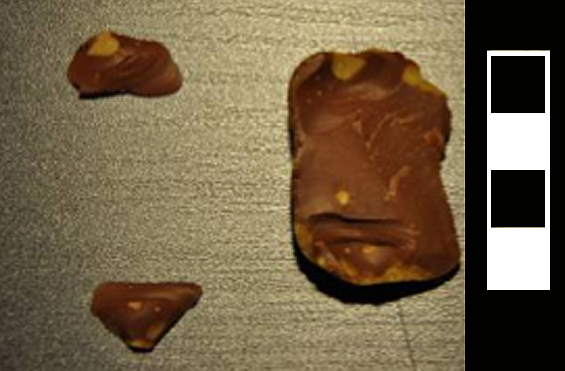 3) Dèbitàge characterized by the so-called slices (below).