The period commonly referred as Eneolithic or Copper Age is currently poorly documented in Friuli (Borgna et al. 2011). In particular, features that can be clearly related to the Bell Beaker culture appear to be entirely absent. Until recently, this long sequence of time was basically considered a transition between the Neolithic and a period of the Bronze Age that has been somewhat better documented, but in many ways still needs to be clearly defined. The discovery of the remains of two dwellings and the re-analysis of ceramic and metal artefacts belonging to the last centuries of the third millennium BC has recently suggested a cultural framework for the north-eastern tip of the Italian territory that, in general, agrees with what has already been observed for the Eneolithic period and is in accordance with the trends of the following Early Bronze Age period.

The aforementioned residential structures date to the end of Eneolithic period and consist of the remains of two huts discovered at S. Odorico of Flaibano (Udine) between 2007 and 2008 (Balasso et al. 2009). The diagnostic fragments come from the stratigraphic units of the most recent hut and consist of a body fragment belonging to a bowl with inverted body walls and tubular handles attached to the rim and a small rim fragment belonging to a bowl with a flattened lip bevelled towards the interior, with a slight exterior groove (Fig. 1, nn. 5 and 8).

The bowl with the handle attached to the rim is similar to the vessels defined as “accompanying pottery” (Begleitkeramik) of the Bell Beaker assemblage found in Austrian and Bohemian burial contexts, namely at Henzing (Niederösterreich; Neugebauer and Neugebauer-Maresch 2001, fig. 5, n. 5) and at Velké Přílepy (Turek 2006, fig. 81, n. 1), not far from Prague. Good comparative studies can be made with the Slovenian settlements of Založnica and Parte (Harej 1988, pl. 5, n. 11) in the marshes of Ljubljana, where fragments with flattened lips have been found.

For the latter type of lacustrian settlements, absolute dates from two samples taken from the foundation posts place the building activity roughly between 2550 and 2400 B.C (Velušček and Čufar 2003). Traditionally, that is, referring to the studies of Dimitrijević (1982) and Parzinger (1984), the two contexts were thought to belong to the Late Vučedol period and, in Parzinger’s classification, were placed in the Ljubjansko Barje V horizon, Ig a, associated with, amongst others, aspects of the Makó in Slovakia and Jevišovice B in Moravia. However, the re-analysis of the artefacts, recently carried out by Velušček and Čufar (2003), has attributed the two structures to the middle Danubian culture known as Somogyvár-Vinkovci - a culture that developed during the FB 1 Hungarian chronology, during the first half of the 3rd millennium B.C. This culture would reach its maximum development and expansion both to the north and to the west during the later phase of FB 2 (post-Vučedol) in the second half of the 3rd millennium. 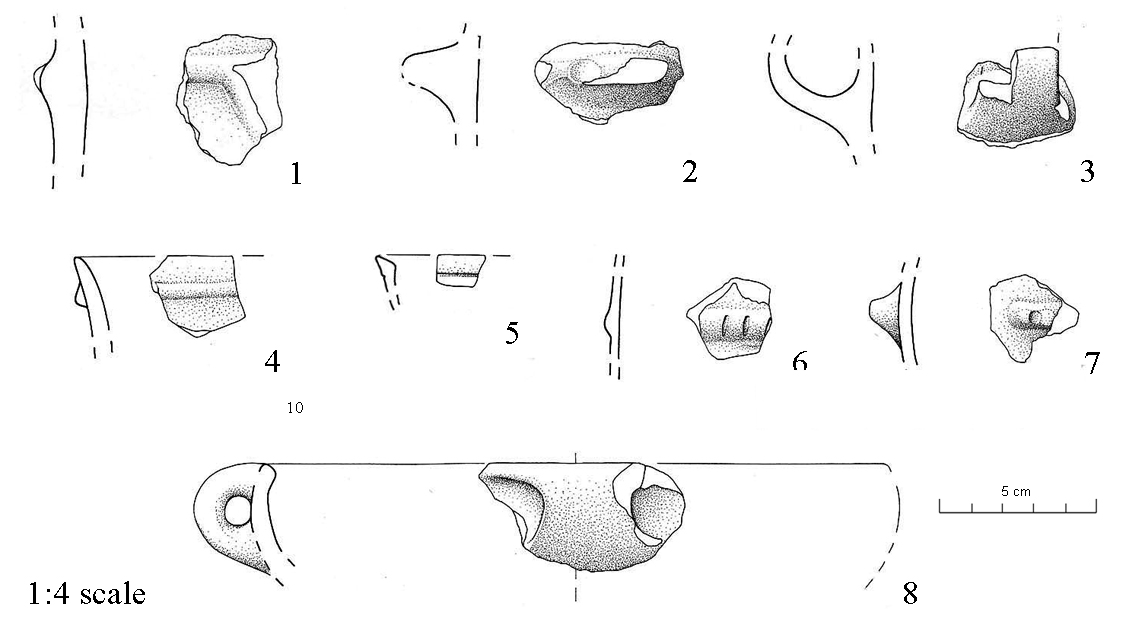 The Austrian context of Henzing is considered part of the in the Oggau-Wipfing cultural horizon, which immediately follows the Ragelsdorf-Oberbierbaum horizon according to the classification of Neugebauer and Neugebauer-Maresch (2001) and corresponds to the Austrian GBK B2a in the classification created by Bertemes and Heyd (2002). This horizon is contemporary with the Protoaunjetitz, the cultural aspects of which served as a basis for, and contemporarily constituted the first part of, the central European culture of Únětice. In its entirety, including the formative period, this period has been dated between 2300 and 2000/1900 B.C ca. The first stage, the proto-Únětice or Protaunjetitz period that includes elements such as the Caka-Makó, Vučedol-Zok, Nagyrév, Schnurkeramik and the Bell Beaker culture, is placed by Weinberger (2008: 30-32) in the Reinecke Bz A1a horizon of central European history, and by Maran (1998: 316) and others in the Reinecke Bz A0 horizon; that is, in absolute terms and considering the two chronological periods together, within a time span of 2350/2300 to 2250/2200 BC.

The bevelled rim with external incision is comparable to bowls found at Skarin Samograd - Croatia, near Sibenik (Marović and Cović 1983, fig. 14, n. 9) -, at Mala Glavica of Podvršje - Northern Dalmatia - and at the Cave of Mitreo in the Trieste Karst - Layer 5 (Montagnari Kokelj and Crismani 1997, fig. 12, n. 102). The Croatian fragments have been dated to the full or late Cetina culture. The rims found at the Mitreo cave, on the other hand, have been dated by Govedarica (1989) to the so-called second phase of the Classical Type of the Culture of Ljubljana, which corresponds to the last horizon of the European Bell Beaker culture and to the Protoaunjetitz period.

The Cetina culture, in its various forms, covers a period ranging from the last centuries of the 3rd millennium B.C to the beginning of the 2nd millennium. However, considering the above - namely that (i) the Oggau-Wipfing horizon and the second phase of Classical Ljubljana, both contemporary to the Protoaunjetitz horizon, and thus included in the Reinecke Bz A0 phase or BZ A1 passage, have been dated between 2350 and 2200 BC, (ii) the dates that are currently available for the construction of the Slovenian settlements of Parte and Založnica all fall between 2550/2500 and 2400 BC, and (iii) the Somogyvár-Vinkovci culture, which developed during the first half of the 3rd millennium BC, had its greatest expansion during its later phase, that is during the second half of the same millennium -, it seems more appropriate to suggest a date falling roughly between 2400/2350 and 2200 B.C for the fragments found at the trapezoidal hut of Flaibano.

Other discoveries found in the Friuli plain can be compared to finds recovered in the central Danubian and Carpathian area which have been dated to this period. For example, a single-handled small jug, found in an isolated furrow at Borgo Ampiano (Simeoni, 2009), in the municipality of Pinzano al Tagliamento (Pordenone), may be compared, albeit with due caution owing to its generic form, to vessels of the Somogyvár-Vinkovci culture. Another example is of two socketed axes (Tasca and Visentini 2009), one of which was found in the surroundings of Aquileia and the other at S. Daniele del Friuli (Udine). These axes have traditionally been classified as the Kozarac or S.Antonino type but they are properly ascribable to the Dumbravioara type, which is widespread in Romany, Hungary and Bulgaria. Evidence of these artefacts can also be found in northern Italy, Friuli, Veneto and Trentino.

This scarce material evidence seems to indicate that at the time Friuli had connections with Danubian/Balkan and Carpathian cultural aspects. This is not surprising since these relations have been ascertained as having existed at least since the most ancient phases of the Eneolithic period of the 4th millennium B.C., and are believed to have lasted, with greater or lesser intensity, until the Late Bronze Age. Furthermore, precisely the connection with the Danubian and Carpathian territory could explain the absence of the Bell Beaker culture in Friuli. Even there, in fact, the Bell Beaker phenomenon is scarce, and according to some scholars (Kalicz-Schreiber and Kalicz 2000) this could be due to the pre-existence of an ancient, autonomous and independent metallurgical tradition that would have made the acceptance of certain material elements often associated with the spread of metallurgy (e.g. Earle and  Kristiansen 2010: 18), such as the Bell Beaker aspects, unnecessary. If this explanation is valid then it could be extended to Friuli, thus demonstrating the existence of links with elements of the Late Danubian Eneolithic, as discussed above, and also suggesting that Friuli was part of this cultural context, even if only distantly.

The relations of Friuli with lands to the east would also seem to be confirmed during the following Bronze Age period, not only due to the presence of ceramics that refer to central European and Adriatic contexts (Wieselburg-Gata and Cetina ceramics), but also due to the recent explanation of one of the most characteristic cultural contexts in Friuli during the protohistoric period, the funerary tumuli. These large burial mounds, particularly prevalent in the southern area of the upper plains along a strip that runs from the Torre to the Tagliamento, are on average about 4 to 6 m high with a diameter of between roughly 20 and 25 m. As a matter of fact these mounds have been recently attributed by Càssola Guida and Borgna (Borgna and Càssola Guida 2009, p. 94) to the eastern Adriatic context, enabling us to consider 'the area of the tumuli alignment as a northern border– namely the limit of a newly colonized plain having its centre in the coastal Adriatic area –'.

Apart from acting as a memorial for the illustrious person buried, the tumuli very probably also indicated the possession of land on behalf of the populations that inhabited the plains. Thus, the correlation between the distribution of the tumuli and that of the castellieri settlements does not appear to be incidental. The fact that these two phenomena are closely related is also confirmed by the almost simultaneous construction of the tumuli and the foundations of the sedentary settlements. Radiocarbon analysis carried out on human bone recovered from S. Osvaldo and Mereto (two large funerary tumuli excavated by the University of Udine) has, in fact, dated the former to 1920 B.C and the latter to 1750 B.C (average calibrated date; Canci 2011; Borgna 2011); the most ancient of the four tumuli discovered in the embankment of Sedagliano (tomb 3 with a calibrated date around 1880 B.C.; Càssola Guida 2010) has been dated to a period between the construction of these two tumuli. This exceptional discovery places the foundation of Sedegliano, and thus the sedentary settlements of the Friuli plain, to the Bronze Age, preceding, therefore, the Terramare culture and contemporary, on the other hand, to the most ancient fortified Istrian settlements, such as Mocodogno (Rovinj; Hänsel et al. 2007).

Regarding the relationship between the residential and funerary structures it seems reasonable from our point of view to suggest that, prior to the construction of a sedentary settlement the populations that inhabited the plains felt the need to occupy the territory by building strongly symbolic constructions such as the funerary tumuli.

Borgna, E. and Càssola Guida, P. (2009) Seafarers and Land-Travellers in the Bronze Age of the Northern Adriatic. In Forenbaher S. (ed.) A Connecting Sea: Maritime Interaction in Adriatic Prehistory.  Annual Meeting of the European Association of Archaeologists, Zadar, 2007. Oxford: Archaeopress, 89-104.