GASPARINI, D. and MILANTONI, C. - Provezza and Pievesestina: evidence of human settlement and agriculture in the Eneolithic and the Late Bronze Age at two archaeological sites in the province of Forlì- Cesena

This paper is a preliminary report with a focus on the evidence of human settlement and agriculture in the Eneolithic and the Late Bronze Age in the area of Forlì-Cesena. The objects of our study are the two archaeological sites of Provezza and Pievesestina, both NW from Cesena, separated by a distance of 2.5 km. Both sites, which were excavated by means of a program of ‘rescue’ archaeology, are located in a development area.

The excavation of the site of Provezza was carried out in 2006-2008, while Pievesestina was investigated in 2011-2012 , both under the scientific supervision of Monica Miari - Soprintendenza dei Beni Archeologici dell'Emilia Romagna. The sites date from the Eneolithic to the Early Bronze Age (2800-2200 BC). Currently, archaeobotanical studies are being carried out on samples from both the excavations.

A preliminary analysis on the pottery from the sites has identified the absence of scale and ‘squama’ decorated pottery, which may indicate an initial settlement phase dating to a post-Eneolithic phase. Additionally, the pot sherds do not present any strong chronological feature or evidence of the Late Bronze Age, but are characterized by rough walls with no decoration, typical of the late Eneolithic, and walls with comb impressions.

Excavations were carried out in Provezza, in the western suburb of Cesena and within the development area of the “Canale Emiliano-Romagnolo” (C.E.R.), between 2006 and 2008. Investigations unearthed a settlement dated between the first half of the 3rd millennium BC and the Early Bronze Age (Fig. 1).

The archaeological site is located approximately 3 km north of Diegaro (FC). The site was identified in 1975, during the construction of the E 45 highway, following the discovery of pottery sherds from the cultural group (classification) of Tanaccia, which is attributed to the early phase of the Bronze Age in the Romagna region.

In Provezza, prehistoric levels are at a depth of 1.80 m (between 25.76 and 25.81 m above sea level), buried beneath both modern arable ground and a layer of alluvium deposited after the abandonment of the village. The whole life of the village was markedly contained in an anthropic deposit, of 0.30-0.40 m depth, the contents of which showed no recognizable signs of interruptions or clear phases of abandonment.

An extension of investigations has been concerned with two adjoining areas, the first one corresponding to the open trench for the laying of the “Canale Emiliano Romagnolo” (Area A) and the second one with the future pumping tank denominated "Vasca Righi" (Area B): the investigated extension is around 1500 m², but the archaeological remains continue beyond the limit of excavation. 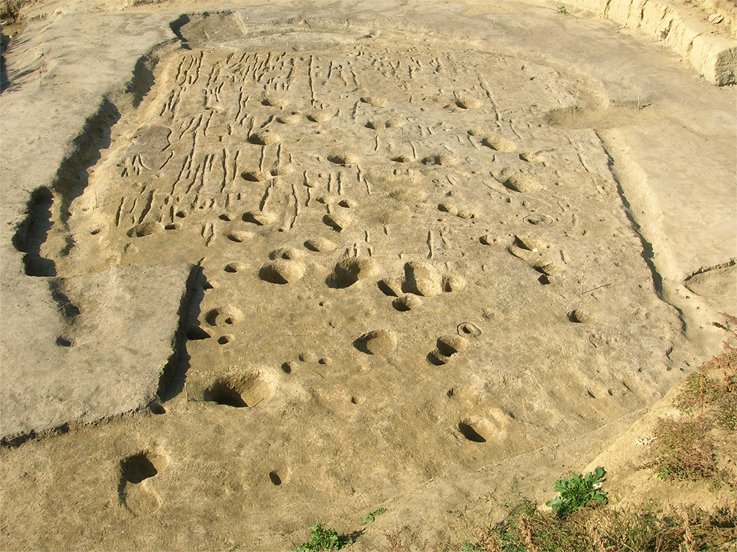 At Pievesestina of Cesena, excavations took place between March 2011 and April 2012, in advance of the construction of the new Hera Group Centre of Environmental Hygiene. These investigations revealed agricultural exploitation of the territory dating to a period between the end of the Eneolithic and the beginning of the Ancient Bronze Age.

The prehistoric deposits were recorded between around 22.70 m and 23.25 m above sea level (1.40 m depth). These deposits were overlaid by arable ground and an alluvial deposit of around 0.30 m thickness. The development of prehistoric activity on the site can be traced within a 0.25-0.30 m thick deposit suggesting a consistent human presence without periods of abandonment. The excavations covered a surface of around two hectares: they were conducted in an extensive manner inside the ‘vasca di laminazione’, an area of around 1000 m², with further works carried out within the foundation trenches of the planned buildings.

The site of Provezza is marked by numerous traces of agricultural plowing that interact with the site’s structures and channels, distinguishing what were apparently different functional areas during the village’s lifetime (Figs 2 and 3). The principal orientations of the furrows are essentially N-S and E-W, in spite of the fact that analysis of the different alignments of the plowing has shown around ten different micro-angulations. The widths of the furrows are between 7 and 20 cm, and their depths between 3 and 5 cm. The continuous traces are of a minimum length of 0.60 m to around 14 m. They are separated by distances of around 0.57 m to 1.50 m (Mazzoni 2010). The furrows appear to have a rectilinear course, with sides converging towards a flat base, with a profile akin to an inverted trapezium.

In the 'Vasca Righi' area (Area B) traces of plowing seem to be particularly fragmentary and their lengths do not exceed 1.90 m. This is due to the stratigraphical complexity in the area and the abundance of negative traces related to structures from different phases of the settlement that have the tendency to overlap. Notably, in this area drainage channels don't seem to mark field boundaries, because the plow scrapes often cut the fills of channels which have fallen into disuse. The channels instead define two large areas between which the differing orientations of plowing, N-S and E-W, are distributed, as in the ‘Condotta’, with small variations that show the constant reuse of the area with relative rotation of fields.

At the Pievesestina site, the plow marks are distributed in a uniform way inside the investigated area. They were organised in two separate networks, one with a NW-SE alignment, the other with a northeast-southwest alignment. The two networks overlap, clearly representing two separate phases in the plowing activity, possibly associated with an initial attempt at farming using rotation. These furrows also have a very rectilinear course, with a flat base and inverted trapezium profile, and penetrate the geologic substratum US 3 to a depth of around 6 cm. 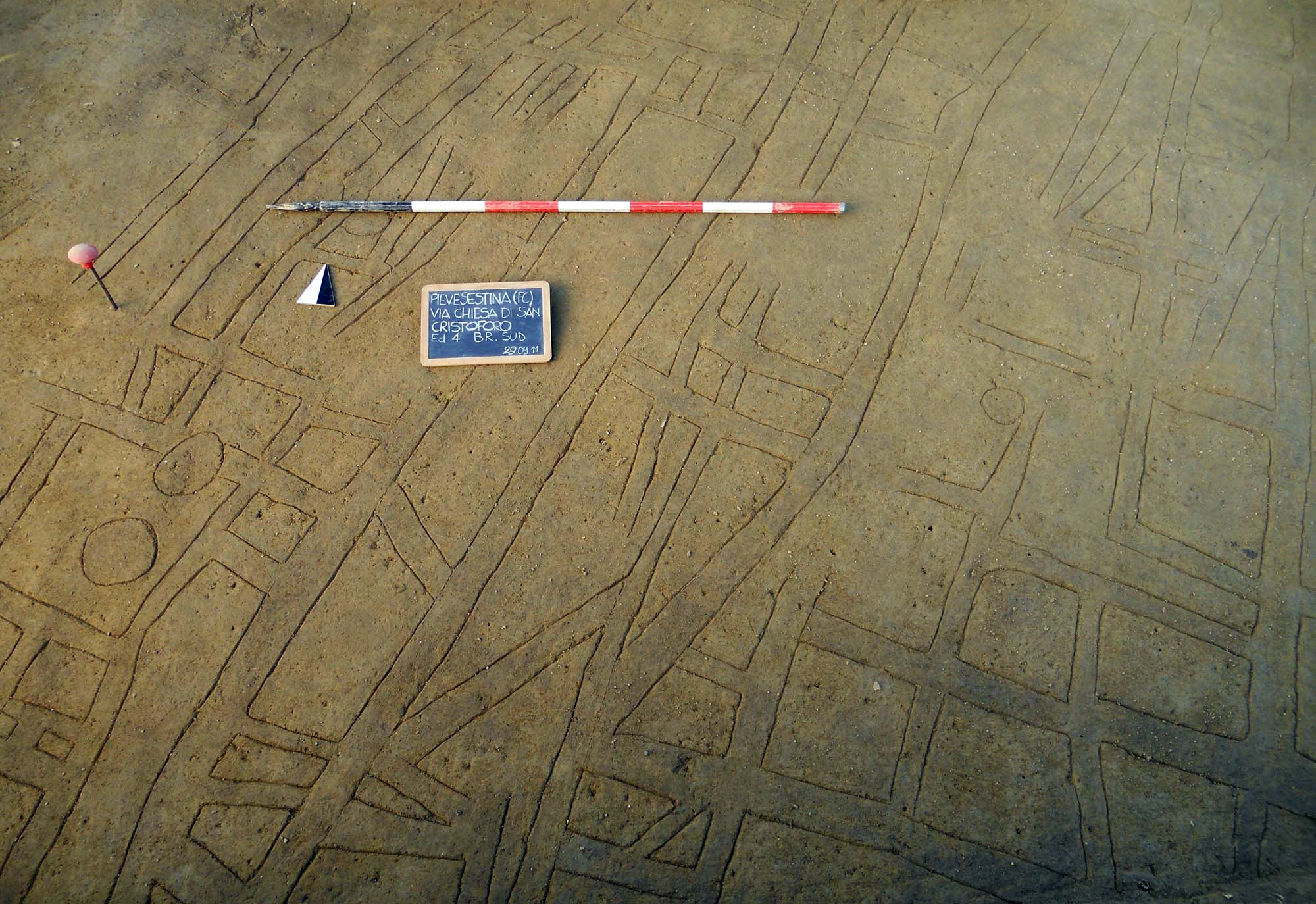 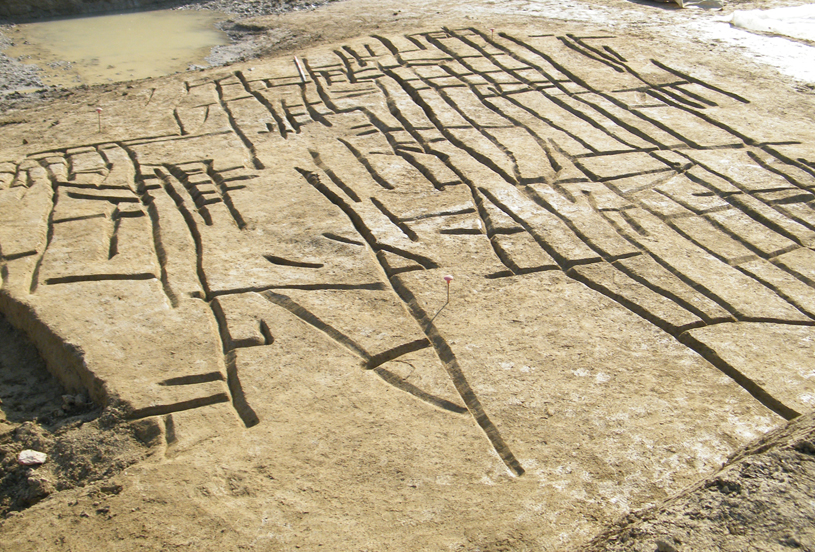