CARRI, A. and HIROSE, M. - PO-BASyN: population and settlement dynamics in the northern Po plain

The beginning of the Bronze Age in the Lake Garda area and in the Po River plain coincides with the first wide exploitation of this territory, with large deforestation and transformation of landscape for agricultural purposes. This produced a relevant demographic growth, with the setting of the first long term villages of considerable dimension, and the blossoming of the Polada culture. Settlement is a slow process that started at the beginning of the Early Bronze Age in the Lake Garda region and gradually reached the Po River plain during the later periods. The study of this process gave us the chance to test for the first time the full potential of the PO-BASyN web application.

PO-BASyN (Po Valley and Bronze Age Settlement Dynamics) is a web application (http://archeoserver.it/pobasyn3/ - Fig. 1). It is not only an open source database aimed at the filing and sharing archaeological data, but also a useful tool for processing data and for creating automatic archaeological maps.

Within PO-BASyN, data concerning each archaeological site are recorded in a different datasheet, which includes a code identifying the territorial district of the site and the sequence of input in the database (ex. BS016 - Lavagnone). The datasheets contain windows for geographical information, type of the sites, chronology (ages, periods, and phases), and modality of find. Moreover, a free window is available for including any other kind of data, such as description, bibliographical references or links to related internet sites (Fig. 2). Excavation and finding records are also linked to each site datasheet are linked also excavation sheets and finding sheets (Fig.3), the latters are divided into ceramic finding and not ceramic findings, and they display information concerning the typology and chronology. They could also contain an image.

Each site in the database is geo-referenced with absolute coordinates through Google Maps. The geo-referencing and the information in the site datasheet allow the creation of maps, which are draw according to the queries of research 'localisation', 'type of site', 'association with archaeological findings', and 'chronology' (Fig. 4).

All internet users are allowed to do research through this application, whilst registration is required in order to enter new data to enrich the system require a registration. Users can easily ask for registration contacting by email the PO-BASyN administrators, who will provide them with a password after having verified their credentials.

SURVEY AND DOCUMENTATION FOR THE EARLY BRONZE AGE (A.C.)

With the purpose of realizing a complete geographical map of the settlements and of investigating the development dynamics of the Polada Culture and of the Late Polada Culture (also known as Barche di Solferino culture), a working team composed by graduate and post-graduate students from the Institute of Protohistory of Università degli Studi di Milano surveyed the published literature and the unpublished documentation of all bronze age sites known in the districts of Cremona, Brescia, Mantua and Verona [2], and input the information collected into PO-BaSyN.

Since nowadays the study of settlement dynamics on a large scale still depends on archaeological finds often hailing from old museum collections or from surface surveys, the work tool for ascribing the most of the sites to one or more chronological ages, periods or phases of the Bronze Age consisted in a typological comparison of the pottery found in these sites with the reliable sequences of pottery findings deduced from the few stratigraphical excavations.

For instance, the dating of the archaeological findings considered as markers of the first period of Early Bronze Age I (EBA I A e I B) were based on the typology identified by scholars from excavations in sites such as Lavagnone (De Marinis 2000, 2007), Lucone (Bocchio 1985-1988), Polada (Barich 1971) and Bande di Cavriana (Piccoli 1986). Also, sites as Canàr[3] (Salzani et al. 1996), Dossetto di Nogara (Belluzzo and Salzani 1999), Montalto (Salzani 1987), together with the above mentioned Lavagnone (Rapi 2007) and Lucone di Polpenazze, were considered meaningful for the definition of the advanced phase of the Early Bronze Age I (EBA I C).

The sequences of Lavagnone 4 (Cazzanelli 2007), Fiavè 3 (Perini 1984) Lagazzi del Vhò (Simone and Tinè 1996) and Ostiano S. Salvatore (Pia 1987) are to be considered as sound contexts for the last period of the Early Bronze Age (EBA II), marked out by the diffusion of a decorative innovation called Barche di Solferino style, by casseroles with inner cross motifs and the first diffusion of carinated cups with sharp bent or ringed handles.

For EBA typology, unfortunately, we can almost exclusively count on ceramic findings, as bronze objects are very rare. However, the few bronze findings are important to establish transalpine connections, in particular the eyelet-headed pins (Ösenkopfnadeln) from Ledro (Rageth 1974) and the disc-headed pins (Scheibenkopfnadeln): the former testify contacts with the Carpathians-Danube areas; the latter, with the Wieselburg-Gata Culture (David Elbiali 2000 - cited in de Marinis 2000).

The above mentioned typological sequences of Lavagnone, Lucone and Canar are the more important ones since they allow to hook up the archaeological findings with absolute dendro-chronological dates. Comparable dendro-chronological analyses carried out in Lavagnone and Lucone allow to date the EBA I and EBA I B to the 21st-20th century [4], while analyses from Canàr date the EBA I C to the 19th century [5]. Unfortunately absolute dates for EBA II aren’t still available, as only an axe of Langquaid type from Fiavè 3 allows to relate EBA II and Transalpine cultural groups of Bz A 2b.

The origin of the Polada Culture is marked by the stabilization of the settlements, which mainly took place in the intermorainic basins and in the area surrounding Lake Garda (Fig. 5).  In this area there are some of the most long-lasting pile dwelling settlements, such as Lavagnone, Lucone di Polpenazze, Barche di Solferino and Bande di Cavriana in Lombardy or Ledro in Trentino. The richness of natural resources allowed to balance the disadvantages of a low-productivity economy; the abundance of food supplies was one of the main causes of the population increase and of the subsequent colonization of the Po valley.

Since EBA I C (19th century BC), an increase in the number of settlements is documented by the construction of outposts towards the plain, like Ostiano, Lagazzi del Vhò, Dossetto di Nogara and Canàr (Fig. 6), and by the findings of the necropolis of Sorbara d’Asola (Baioni 2000), in the district of Mantua. As far as we know, this necropolis is the most ancient Bronze Age cemetery in the lower part of the Po plain, dating before EBA II, and back to EBA I B or I C (De Marinis 2003).

The number of sites along the south banks of Lake Garda and in the intermorainic basins further increases during the EBA II. New settlements appear and most of those from EBA I continue to prosper (Fig. 7).

The colonization of the north Po plain starts. New villages are often settled along resurgence lines or along the banks of rivers such as – from West to East – Oglio, Mincio, Osone, fossa Molinella, Tione and Tartaro: this hydrographic network proved to be effective for the Polada culture in order to penetrate and spread within the Po river plane. This area was rich of marshes, and therefore suitable for pile dwelling villages.

The first occupation of Mincio paleo-river is documented since the latter phase of early Bronze Age. We find a high density of sites in the surroundings of Buscoldo di Curtatone, particularly in Avalli di Sopra, Avalli di Sotto and Fondo Madonnina; the pottery from Fondo Madonnina is strictly similar to the pottery found in Barche di Solferino, Isolone del Mincio, Cà Nove di Cavaion Veronese and Canàr (Anghinelli and Anghinelli 2001): therefore they can be dated back to the same period. Groups of sites along the rivers Tione, Tartaro and Fossa Molinella are located in the territories of Roverbella, Castiglione Mantovano, Marmirolo, Castel Belforte, Gazzo Bigarello and Castel d’Ario. In this area, the foundation of new villages also starts during EBA II. In the earliest sites, pottery in late Polada-Barche di Solferino style was found (Baioni and Seragnoli 1996).

Most of the PO-BASyN sites of this territory are only few hundred meters far from each other. Many are only known thanks to surveys; therefore, in the absence of stratigraphic excavations, it is impossible to establish their contemporaneity only on the basis of pottery examinations. We can probably interpret this density of population as caused by a rapid series of new foundations of small villages; these were soon abandoned because of the deterioration of structures or the depletion of local resources, due to demographic increase or overexploitation. This hypothesis seems to be the most realistic in the light of the long duration (about two centuries) of the Early Bronze Age.

Most of EBA II dwellings are still in use during the following MBA I, both in the Garda area and in the Po River valley (for example Lavagnone, Lucone, Barche di Solferino, Bande di Cavriana, La Quercia di  Lazise, Lagazzi del Vhò and many others in the plain between eastern Lombardia and western Veneto). Settlement dynamics of these two main districts start to differentiate from each other since the beginning of MBA II. In the regions of the Garda Lake and the morainic amphitheater, most of the pile dwellings settlement would have been inhabited throughout the whole MBA II A and B. In the lower flood plain, instead, many small villages of EBA come to an end; new settlements are founded, bigger and farther from each other. The development of large terramara villages takes place.

Up to the present, the lack of EBA I findings in the plain supports the theory of a diachronic diffusion of population from Lake Garda region to the Po River. Nevertheless, the most recent archaeological acquisitions in Emilia Romagna contradict this interpretation. Bronze Age I evidences come from Eia (Quero, BAIM 2012)[6], the mound burials of Santa Eurosia (Mazzieri et al., BAIM 2012)[7] and Forno del Gallo (Beneceto). In this latter site, pottery comparable to that from the Lavagnone 2 phase (EBA I A) was found (Bernabò Brea et al. 2005); this discovery allows to identify a phase of the Polada Culture before the terramara occupation.

Hoards from the beginning of Early Bronze Age, such as Remedello Sopra or Vidana, could today be better interpreted as deposition along the way of communication between northern and southern Po plain. Probably, the first settlements in Emilia also had the function of controlling the Appennine-Piedmont routes, along which EBA I C/II hoards like Savignano (Cardarelli 1997), Scandiano, Baragalla (de Marinis 1997b) and maybe Cadé were found. To this list we can add Castione dei Marchesi, which is in the plane, but not far away from the Appennine Mountains (de Marinis 1997c). Hoards can be interpreted as storages used by itinerant bronze smiths, or as places with both social and a votive-ceremonial function: they could suggest a first attempt of the local population to conquer and manage new territories (not yet socially advanced like Garda settlements), affirming their control through their own religion.

Eventually, new findings in the Po plain will change again our knowledge of Bronze Age hoards and settlement dynamics. 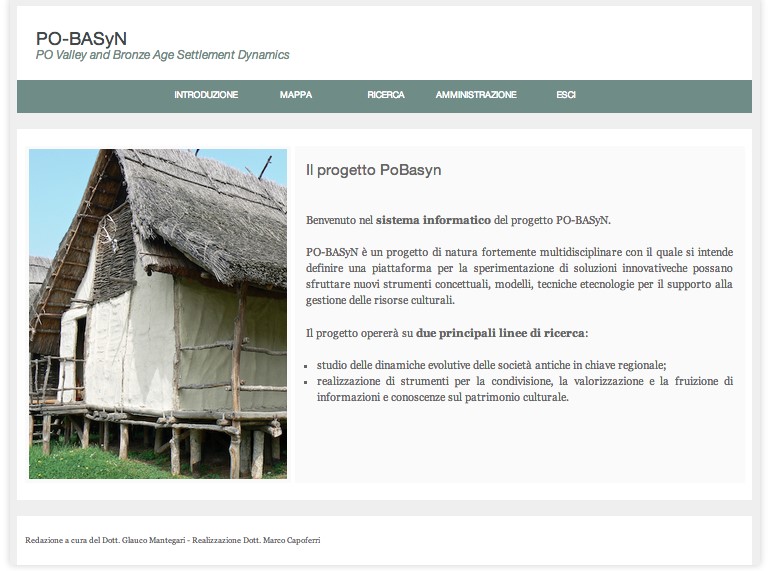 Fig. 2 - Example of a site datasheet. 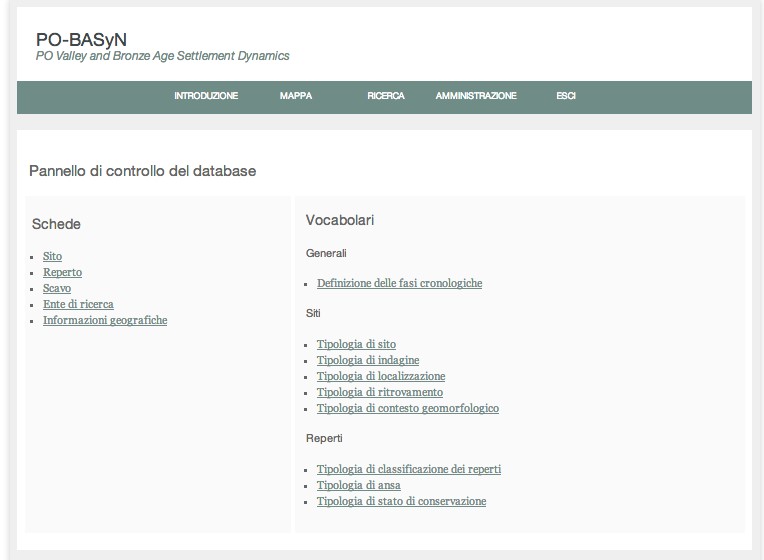 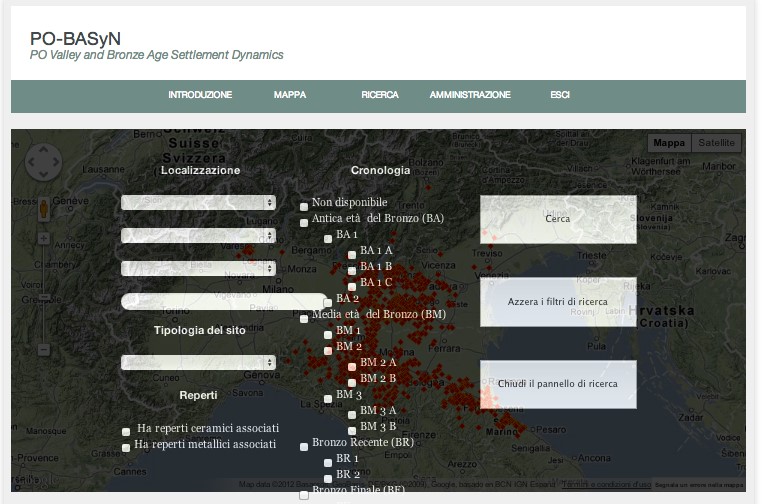 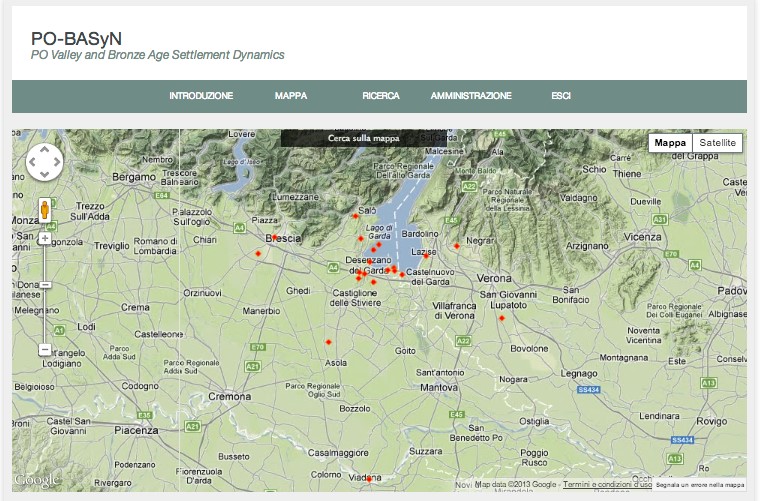 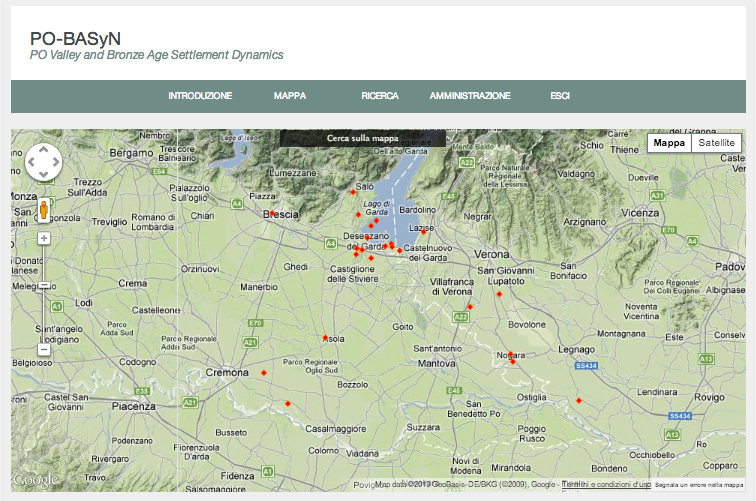 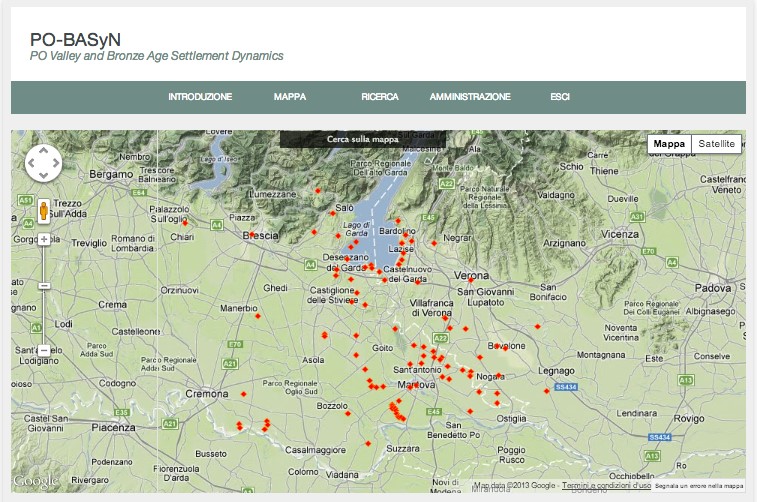 [1] The project was supervised by Prof. De Paoli and dr. Vizzari.

[3] Canàr di S. Pietro Polesine is in the district of Rovigo, which had not been included in our research. Nevertheless, it is equally included in this paper, because of its importance for the definition of EBA I C archaeological horizon.

[5] In Canàr we have only one felling date from a post of structure no.4: 1869-1859 ± 10 cal. BC (Salzani, Matinelli, Bellintani 1996). In the other samples sapwood rings weren’t preserved therefore no felling phase were recognizable.