The authors present the first results of the analysis carried out on the prehistoric lithic industry, collected during the systematic survey campaign of September 2011, in the coastal area of Capo Mannu, central western Sardinia, and coming from old collections from the same area.

Various issues are addressed: study methodologies, quantitative analysis of data, typological description of a lithic sample, an introduction to lithic supply strategies and choices regarding raw material usage, and a short final discussion.

INTRODUCTION
In this preliminary contribution the first results of the analysis carried out on the prehistoric lithic industry, collected during the systematic survey campaign of September 2011, in the area of Capo Mannu, will be presented. In addition, other objects from the same area, but related to sporadic findings and brought to light during previous excavation and survey campaigns, were examined.
Various issues are addressed: study methodologies, analysis of the quantitative data, typological description of a lithic sample, an introduction to lithic supply strategies and choices regarding raw material usage, and a short final discussion.
METHODOLOGY

For the general methodological considerations regarding the collection of artefacts and the project’s database-building, see Castangia, G. in this volume. Obsidian tools, flint tools and those made of different raw materials (trachytic phonolite, basalt and shist) were counted separately inside each bag.

Subsequently the knapped tools were separated from the processing waste, which was counted separately. Grinders, mills, pestles and hammers are excluded from this analysis and will be published in future contributions.

Analytical recording forms, containing information about morphological, tipometric, technological and typological data, were specifically created along with the rest of the database. The retouch was also analysed when present. The database used for this study includes the following entries: 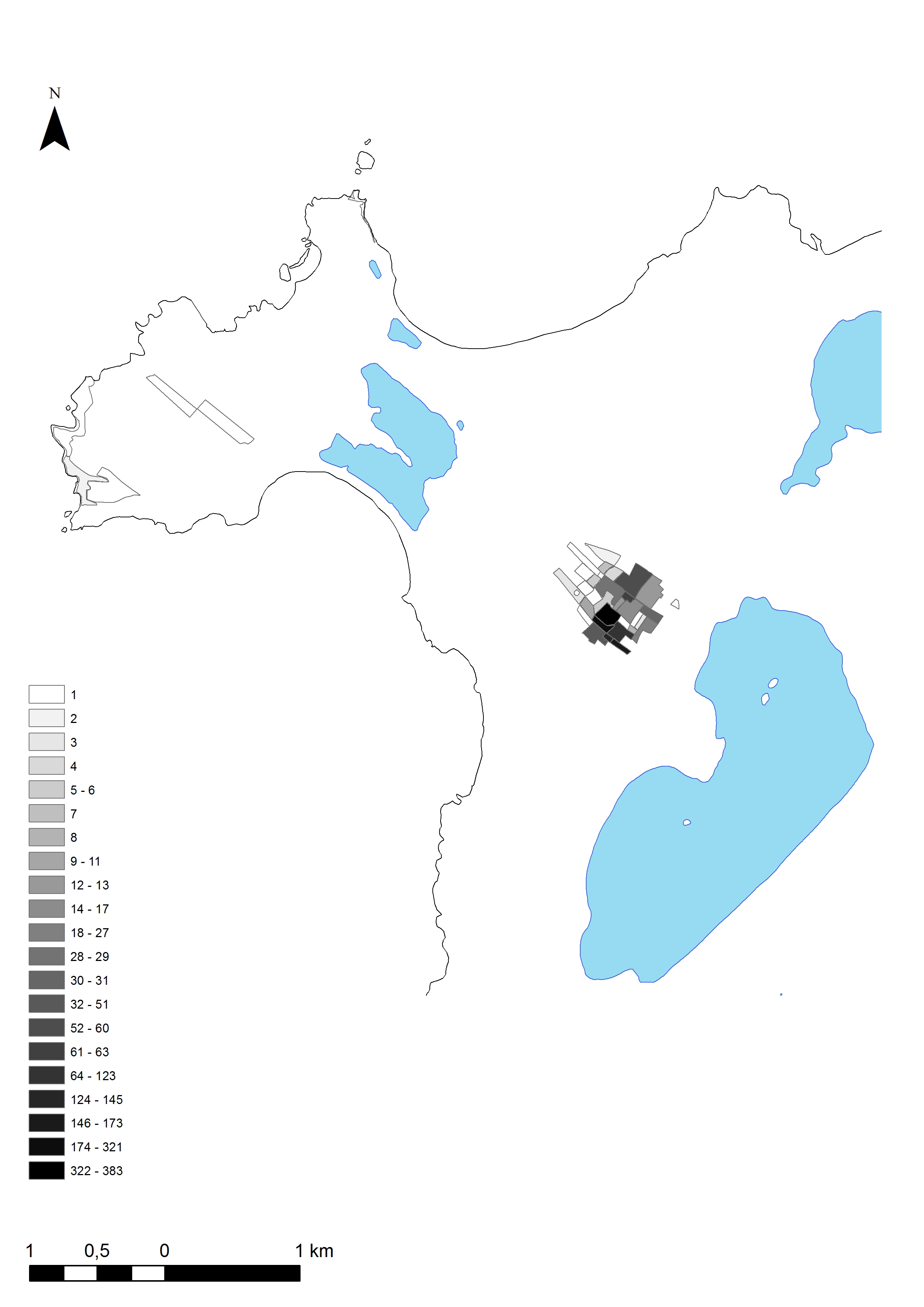 Fig. 1 - Density map showing the number of lithic findings per Territorial Units over the area of the project.
Table 1 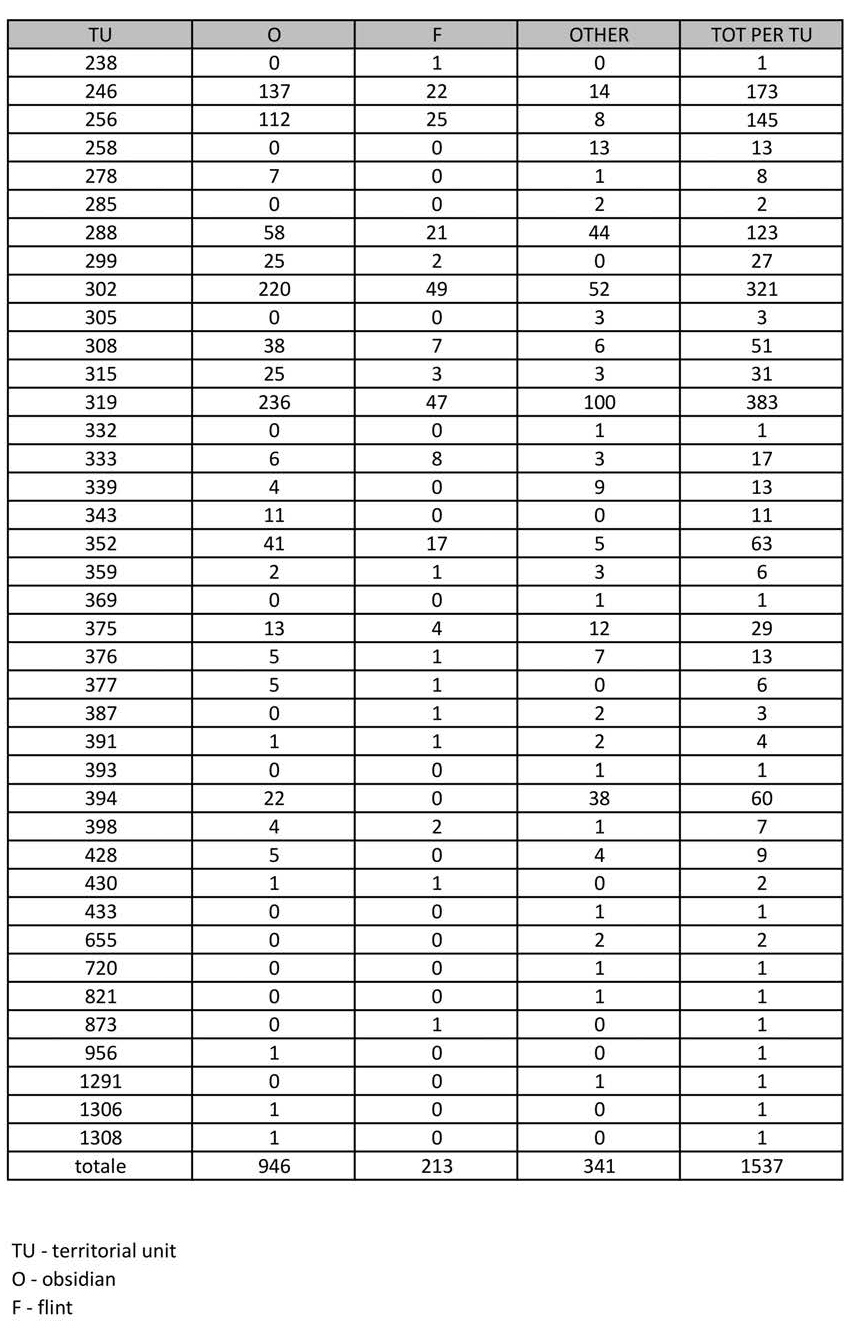 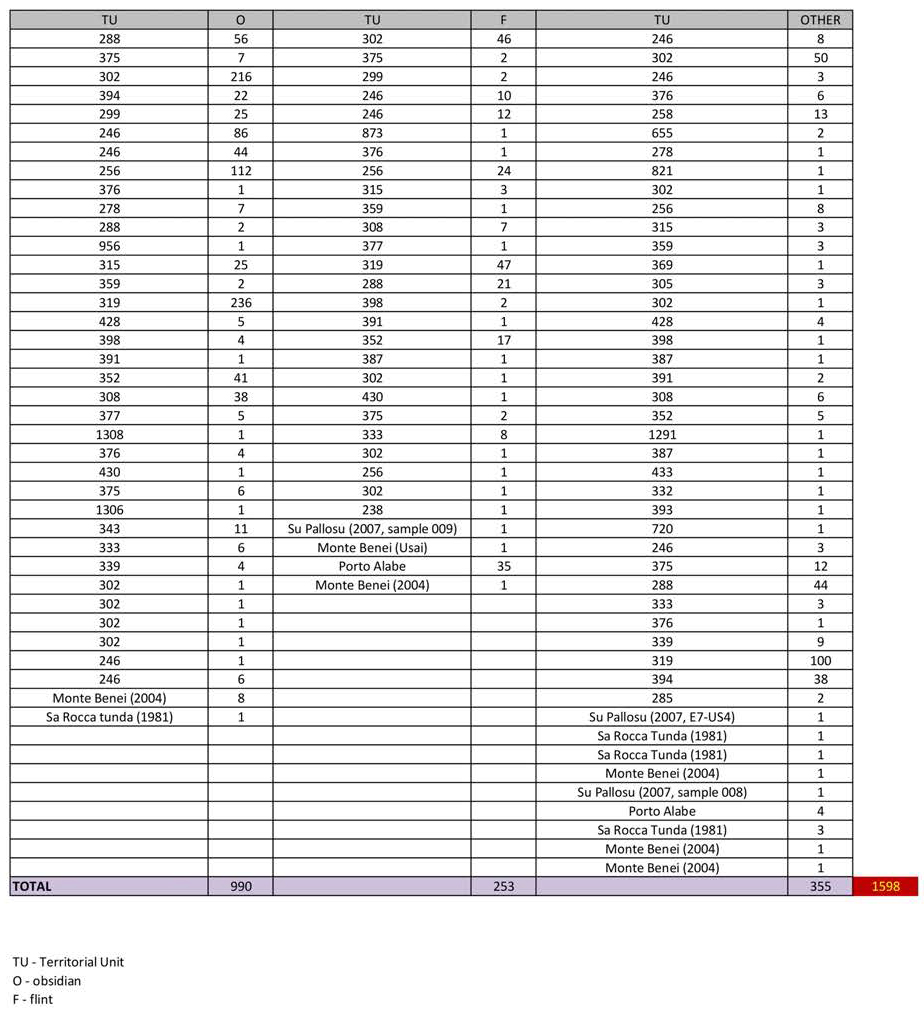 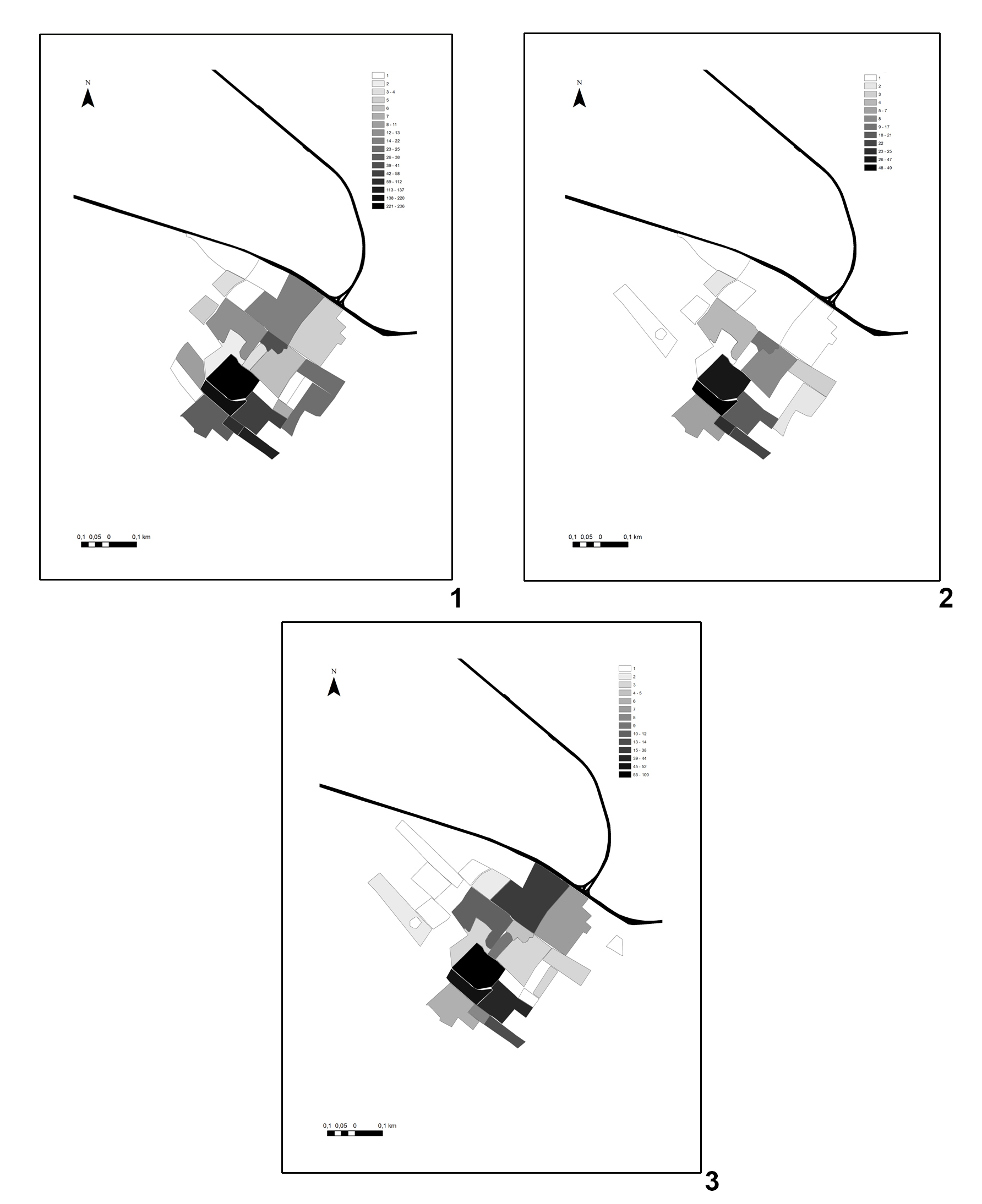 Fig. 2 - Density map showing the number of lithic findings by raw material over the area of Monte Benei: 1 – obsidian; 2 – flint; 3 - other.

The most frequent raw material, without considering heavy stone (grinders, mills, pestles, whetstones and smoothers), was obsidian (984 pieces) followed by flint (251 pieces), trachytic phonolite (13 pieces), and vesicular basalt (12 pieces). Within the sample, objects in schist and greenstone were also present (Fig. 3). Overall, the tools selected for the specific analysis were 61 (Table 3, Plates 1,2,3a,3b, 4a, 4b,5,6). 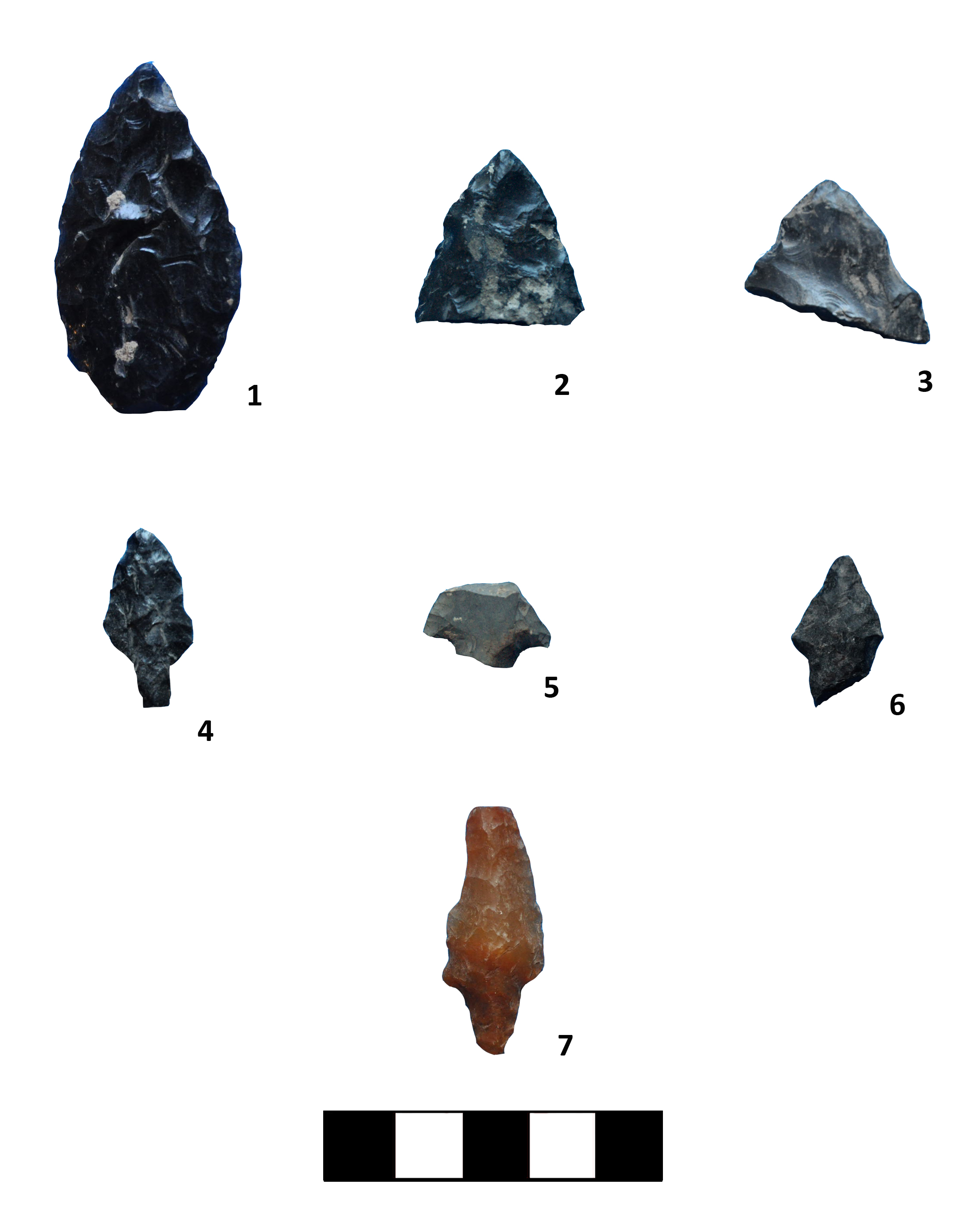 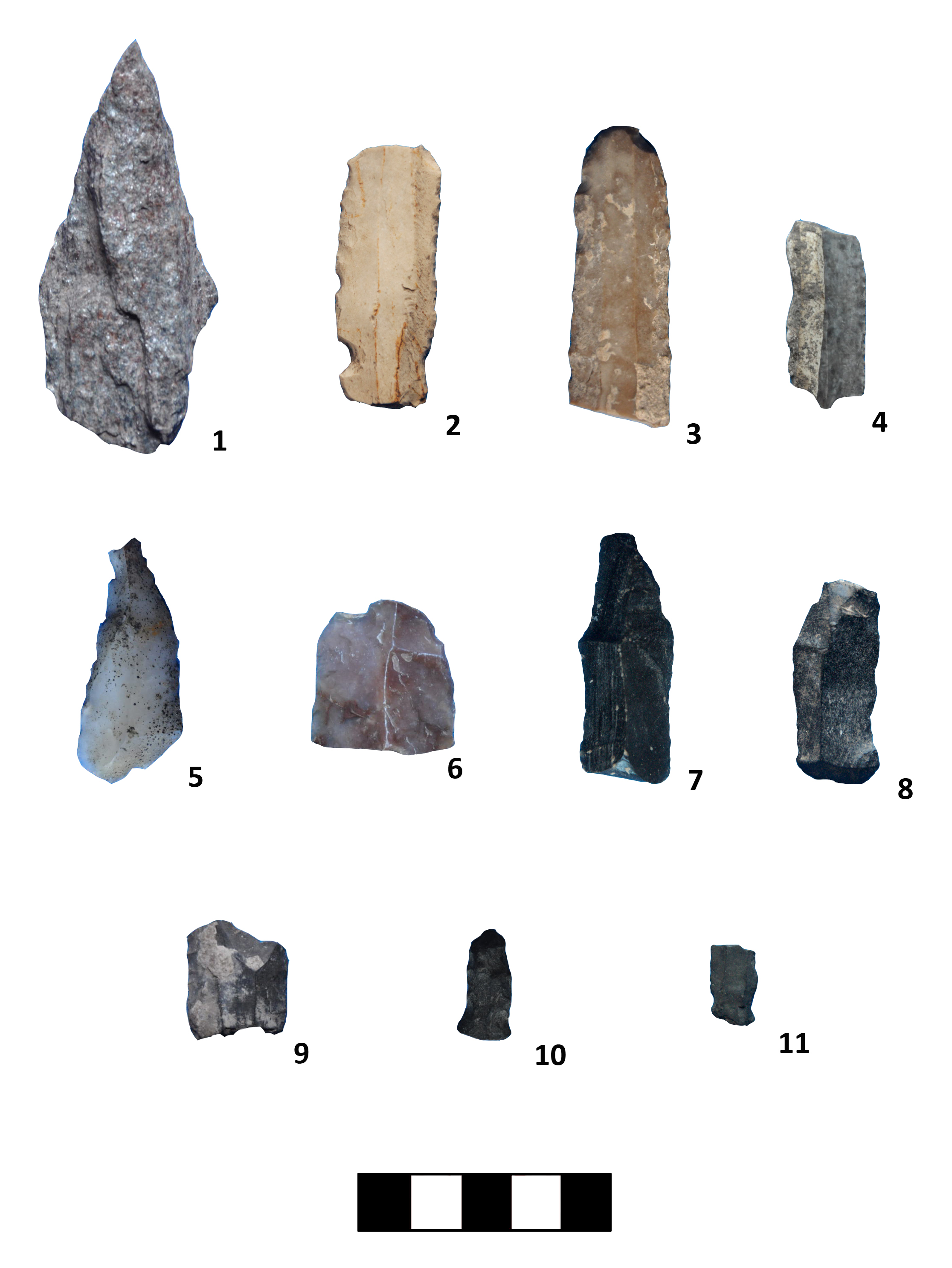 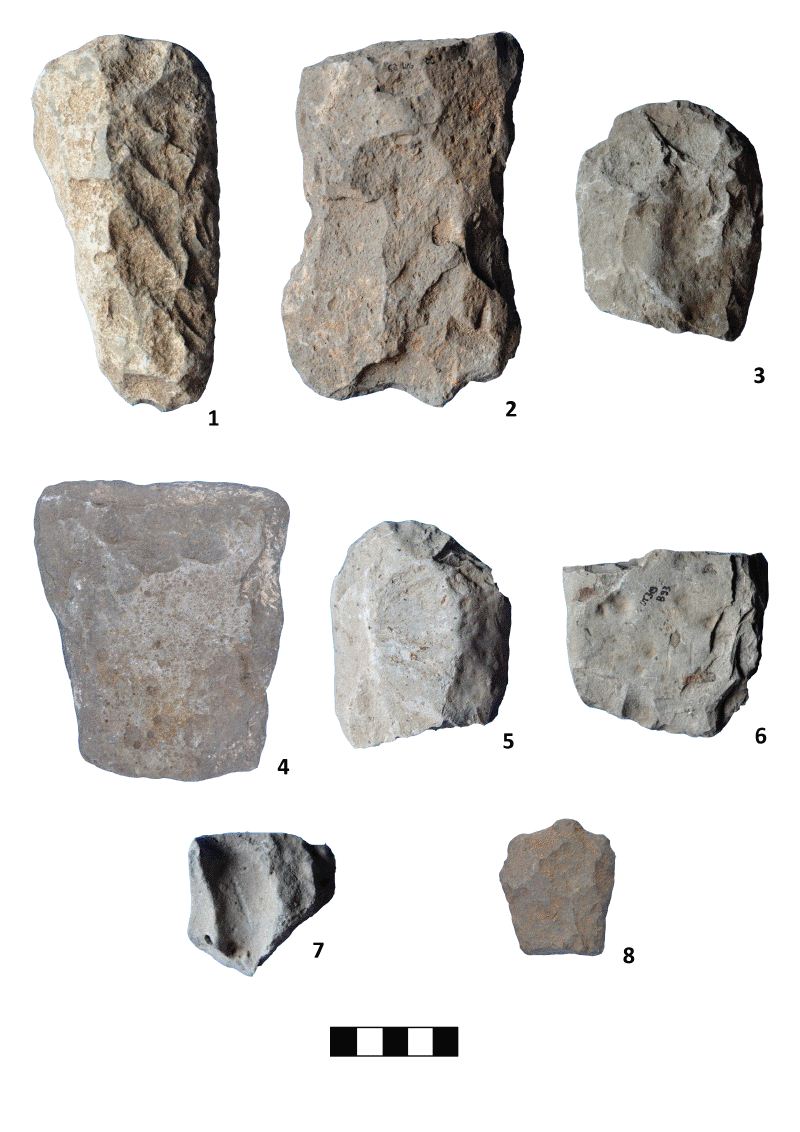 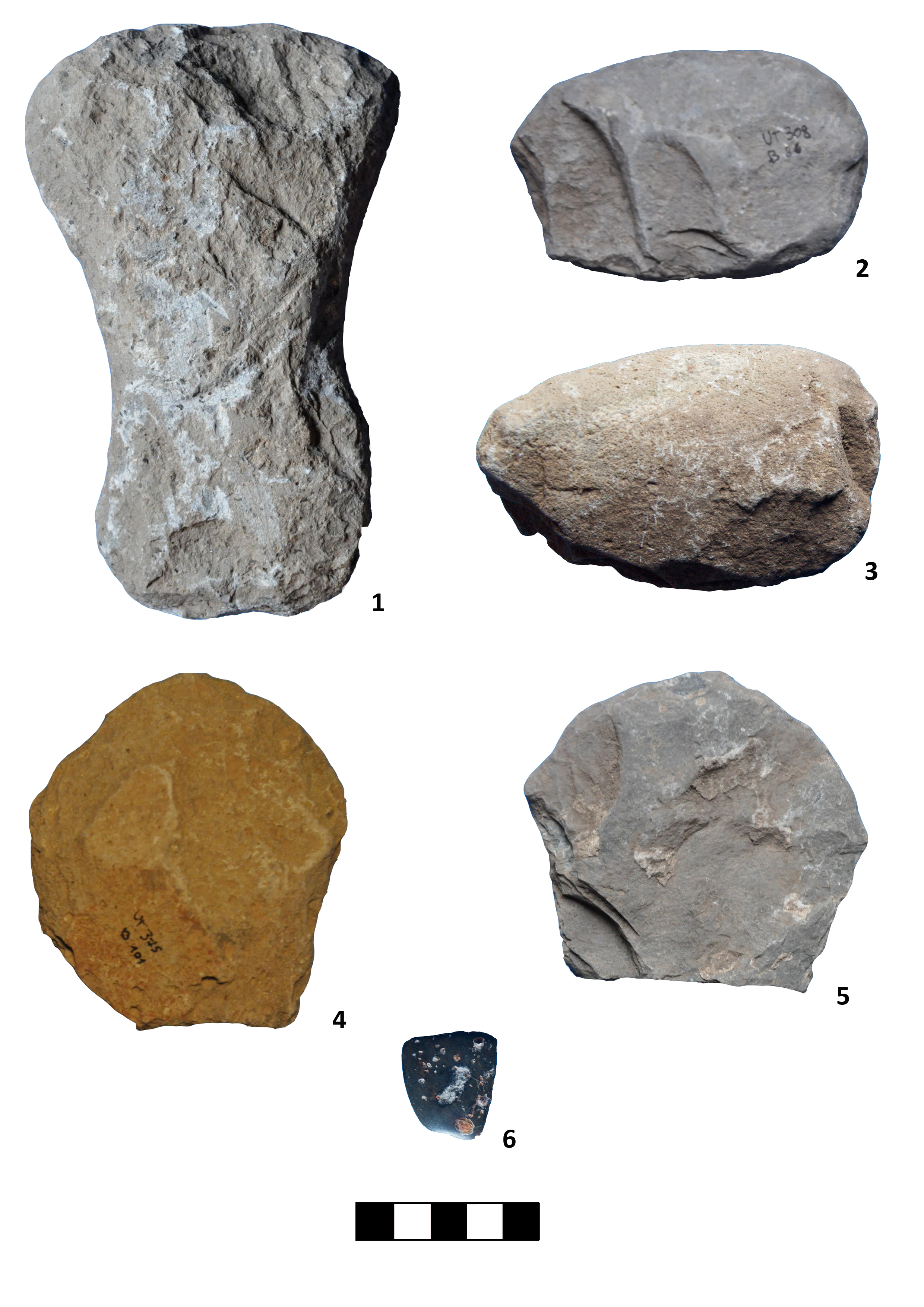 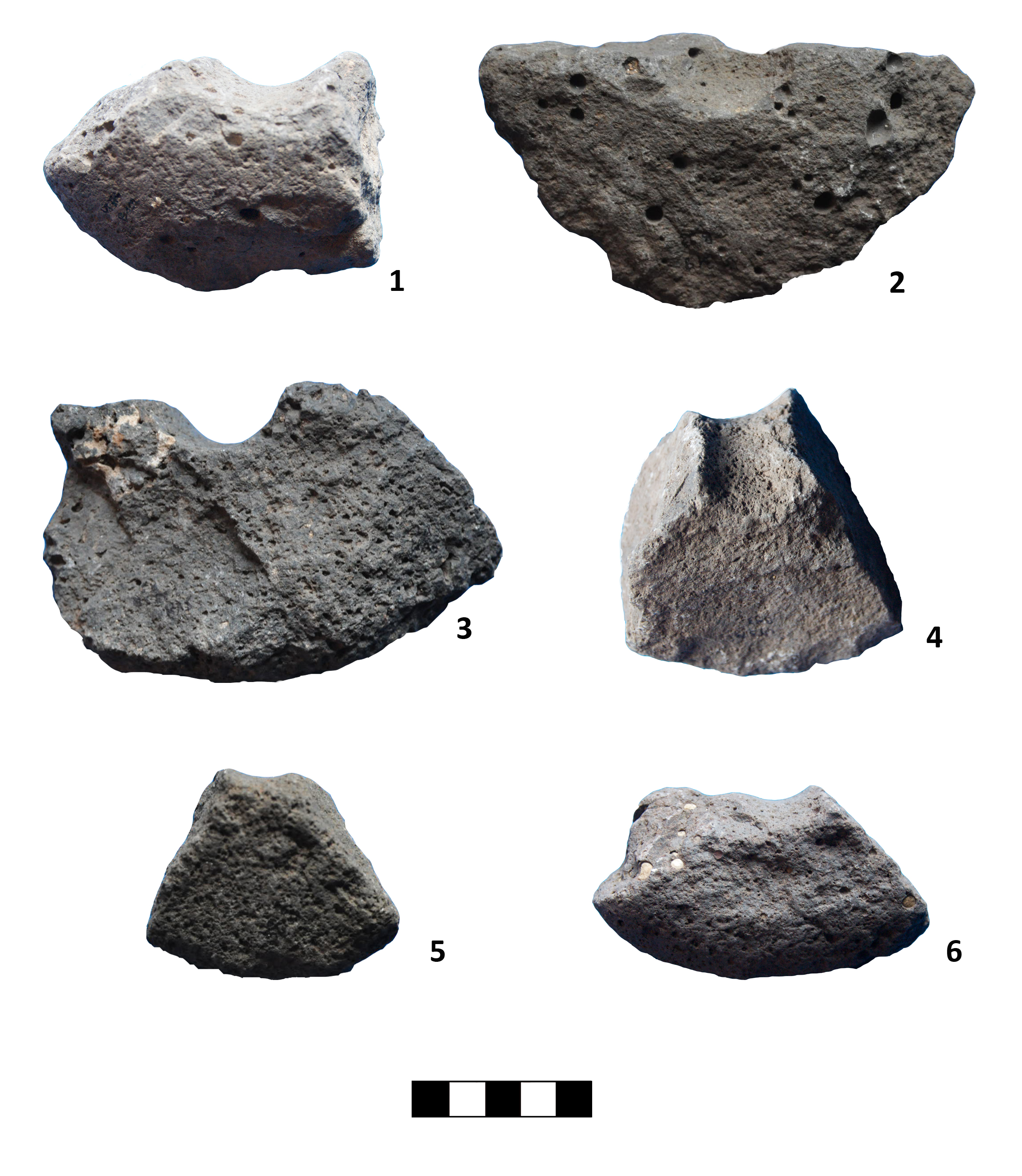 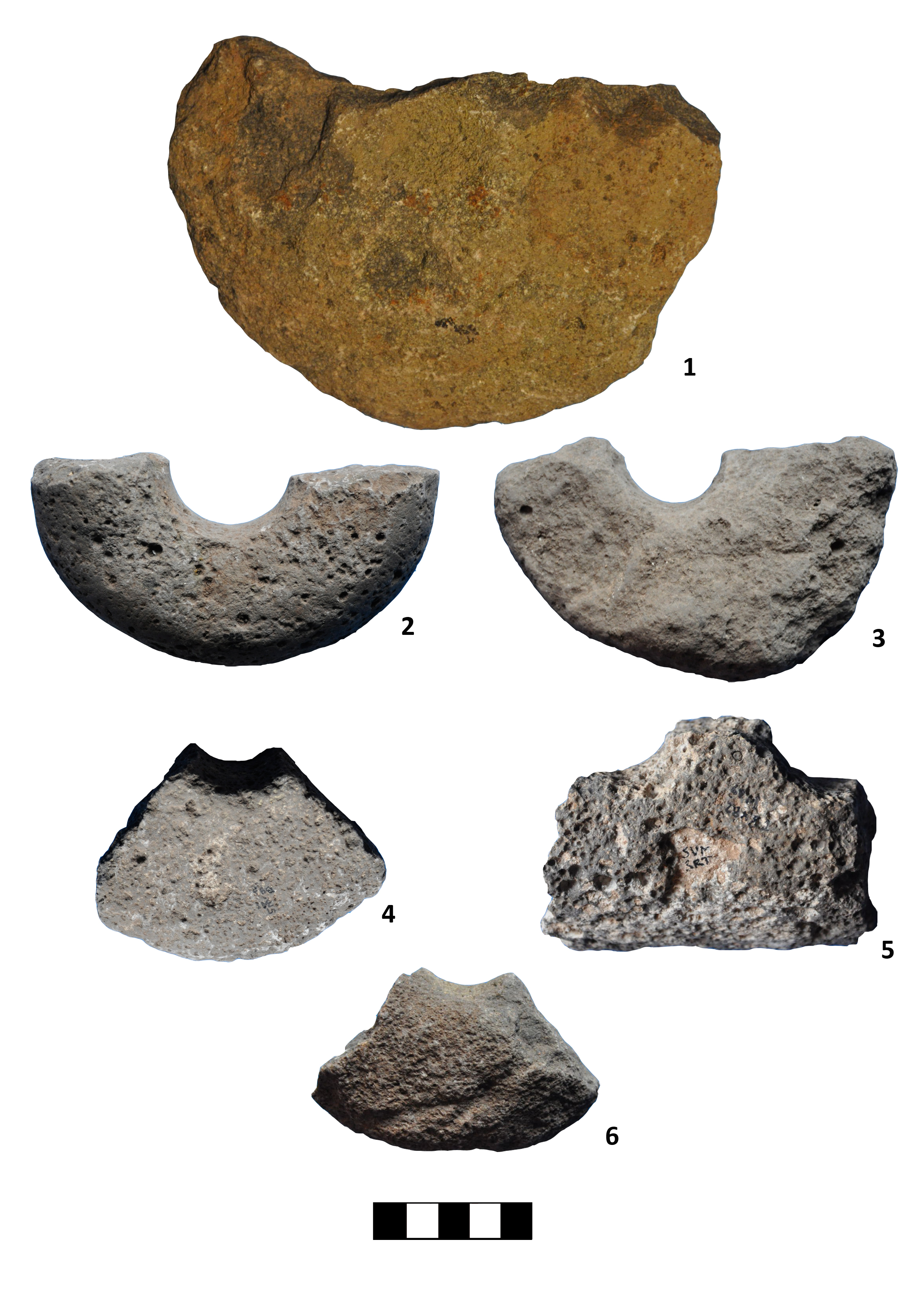 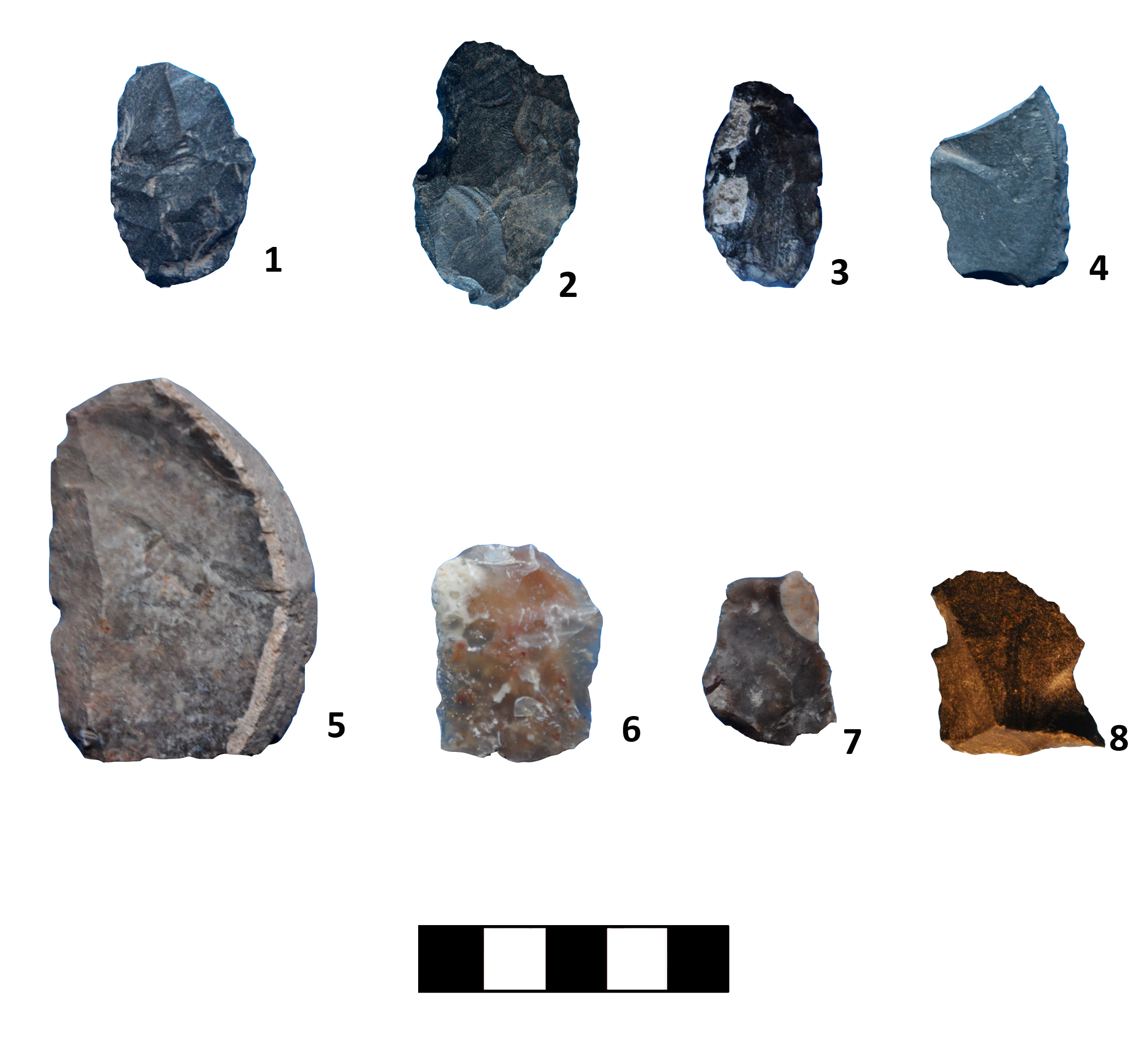 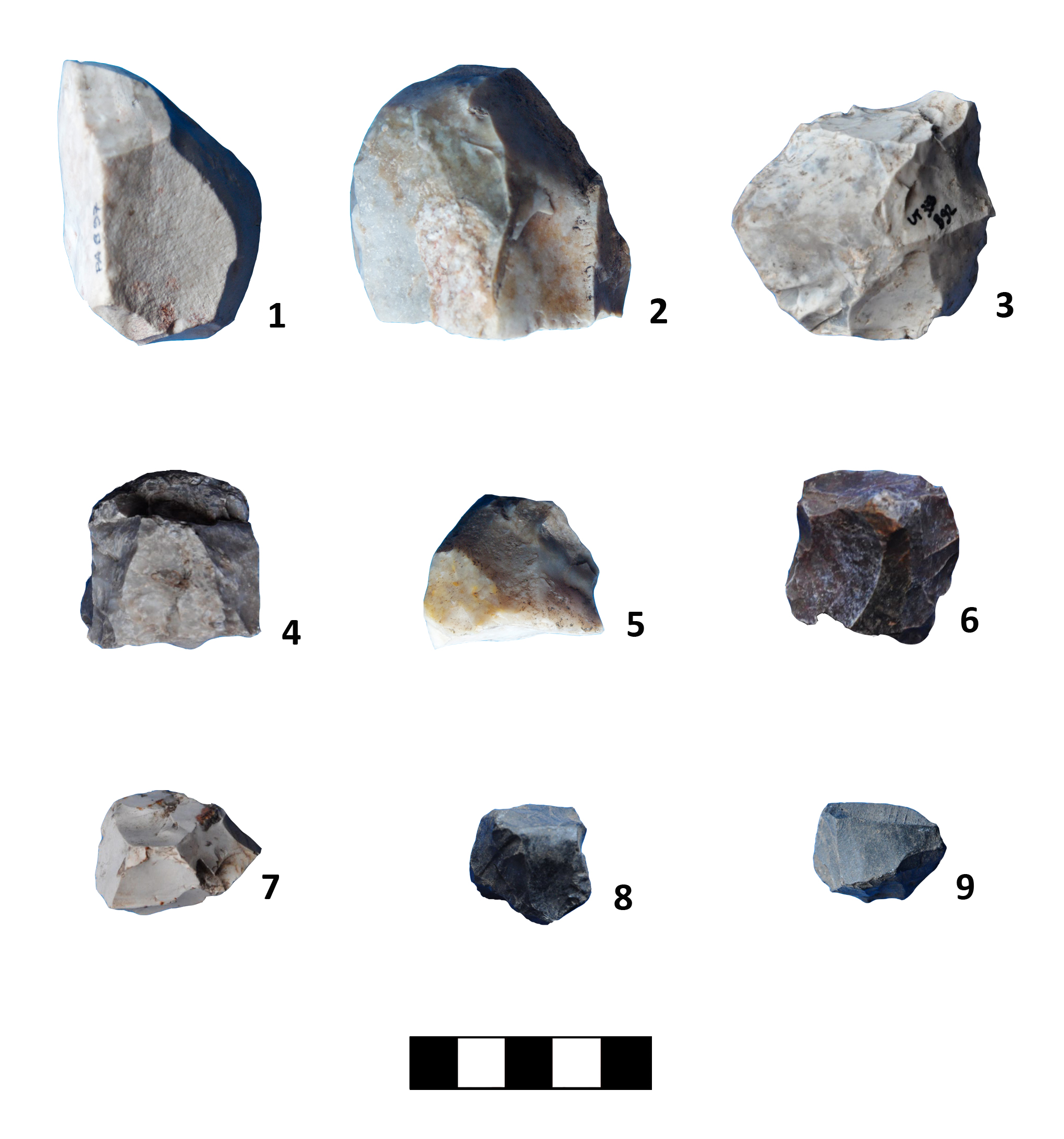 FLINT AND OBSIDIAN CORES AND TOOLS

The obsidian leafed bifacial (n.1 – pl.1 item 1) had broad comparisons within the Ozieri cultural tradition. From the village of Cuccuru Is Arrius (Cabras) - whose cultural framework may be limited to Ozieri and Sub-Ozieri phases (Lugliè and Sebis 2004:239-240) - many published specimens can be cited.  Those from the Neolithic settlement Puisteris Mogoro (Cicilloni and Usai 2004:222) ascribed to the Late Neolithic Ozieri period are also similar to the obsidian leafed bifacial under study. Similar materials, yet unpublished, come from areas adjacent to the Capo Mannu peninsula, particularly from surface collections made in the settlements of Perda Lada - San Vero Milis and Conca Illonis - Cabras (Castangia, Stiglitz and Sebis personal communication).

The blade on a truncated flake n.3 (pl.2 item 2) - probably hafted and used as a sickle - and the flint arrowhead n.2 (pl.1 item 7) had similarities with elements associated with the Ozieri tradition in the north of the island, particularly in Anglona, in the area of Perfugas, Contraguda (Pitzalis 1989:79) and Concas (Pitzalis 1989:81).

The green stone small axe n.19 (pl. 3b n.  6) is comparable with a Late Neolithic specimen from Serra Linta of Sedilo (Tanda e De Palmas 1997:303), and to another one found in the settlement of Cuccuru Ambudu of Serramanna, datable to the same phase  (Melis 1997:331). Mace heads (pl. 4a and 4b), although similar to Bronze and Early Iron Age published specimens from nuragic villages, where they are very common, are more likely to be neolithic or datable to the Roman phase. As a matter of fact, they come from the area of Monte Benei where only a Neolithic and a Roman-phase settlements were identified so far on the base of the pottery. Unfortunately,  publications on and of mace heads are quite rare in Sardinia, especially for periods different than Bronze and Early Iron Age, so we have not enough elements for useful comparisons. 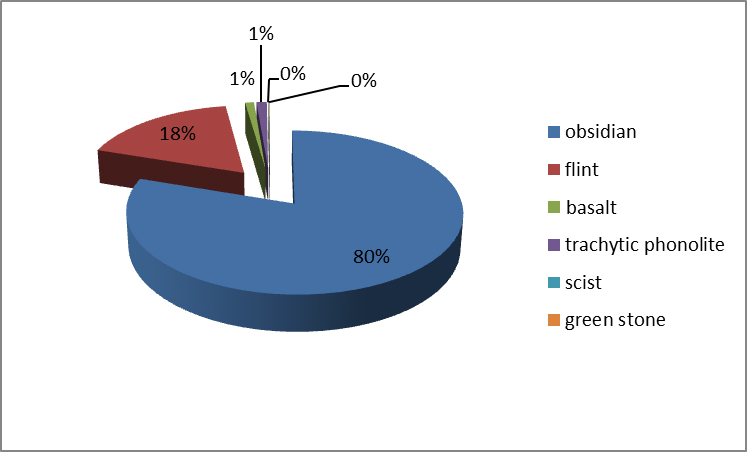 Fig. 3 - Pie showing the percentages of the raw materials within the lithic sample.

The so-called mace heads, round tools with either an eye shaped hafting hole or perforated round head, of which 12 specimens have been catalogued, were made with vesicular basalt. This type of stone is fairly widespread throughout the island, but its provenance from Montiferru is highly plausible, given the close proximity to this site.

The trachytic phonolite was associated with the morpho-functional category of roughly-knapped axes (Lugliè 1999:197-229), of which 13 tools were catalogued. At a macroscopic examination these objects appeared to have been all made of phonolites, trachytes and trachyphonolites from the western slope of Montiferru (Fig. 4). The same lithic raw material is also present in the Monte Arci area further south, and a certain amount of it may have travelled together with obsidian to the Capo Mannu peninsula. Within the Copper Age tradition of the island this tool category was also produced on different raw material supports (andesites, andesitic basalts, and lati-andesitites), which have not yet been identified among the materials from the site of Capo Mannu and could not be attributed to a certain provenance area, because of their wide regional distribution (Marchi et al. 2004: 406-414). Petrographic and geochemical analyses on the analysed tools are scheduled, in order to determine the exact chemical and physical composition.

A unique specimen of polished green stone hatchet was present among the analysed assemblage. It was gathered in the Su Pallosu site area (TU 1291). In Italy lithotypes such as serpentinites, eclogites, jadeites and onfacitites (Chiari et al. 1996: 35-53) can be found. The provenance of green stone, cannot be identified with certainty, because of the wide distribution of this raw material, which extends from the Alps (Piemonte) to southern Italy, until petrographic and geochemical provenance analyses are executed (Barfield 1996:57 -65).

The flint source area used in the Capo Mannu area, and in particular in Monte Benei, was identified during the surveys  on a hill area behind the hamlet of Porto Alabe, in the commune of Tresnuraghes (Fig. 4). The area was reported to the survey team as a likely area of raw material provenance by geologist Dr. Salvatore Carboni. The outcrop, considerably wide, contains various different types of flint, regarding colour, inclusions and translucency, in the form of lists or nodules. The same features were also found in the analysed archaeological material, especially regarding the great variability in colour from opaque white to translucent red-orange, transparent (a type that recalls rock crystal), yellow, brown, grey, burgundy, and many other shades. 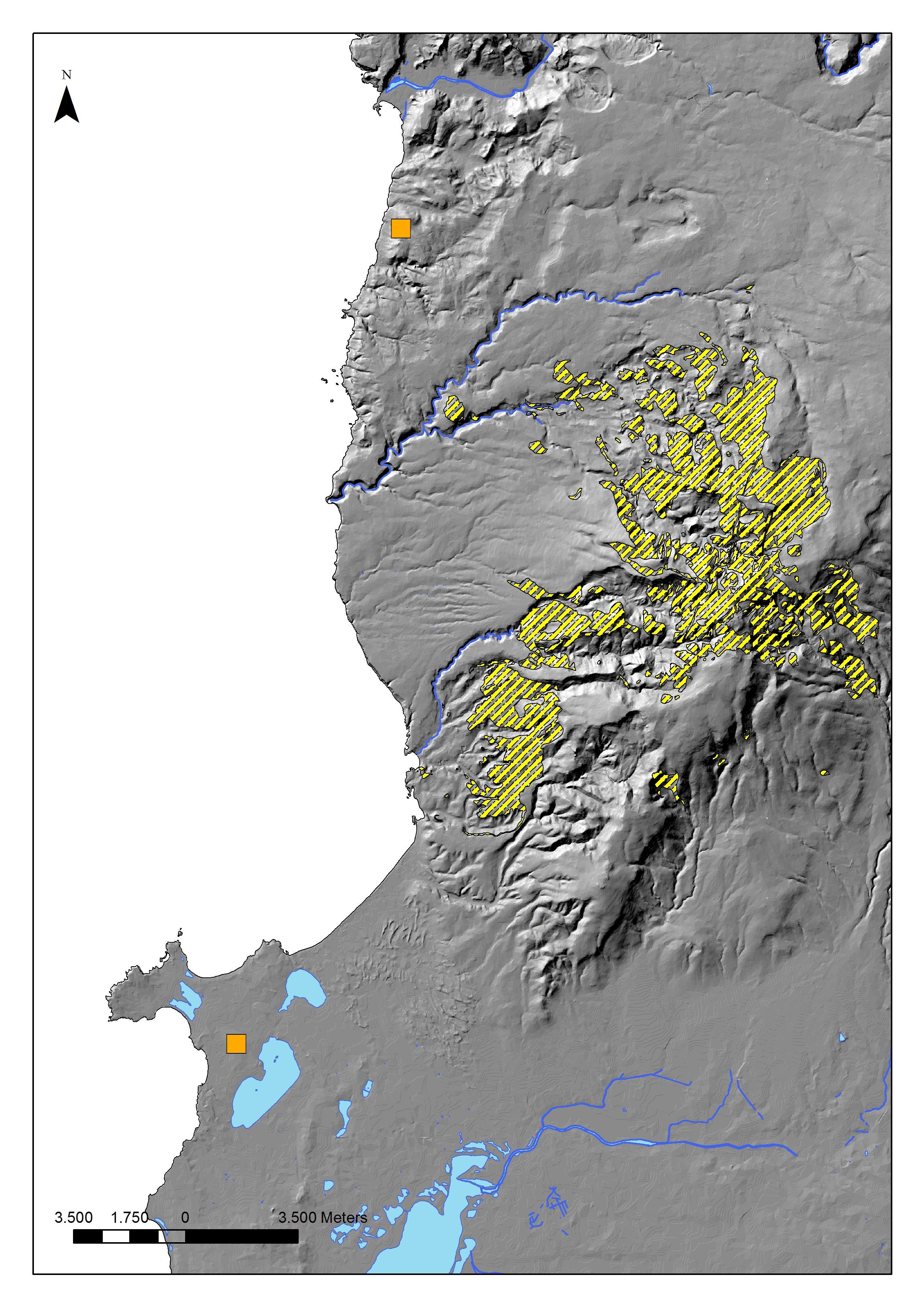 Fig. 4 - Raw material supply map. The yellow area delimits the trachytic phenolite supply area on Montiferru slopes. The top orange square marks the flint supply site of Porto Alabe, whereas the bottom orange square incates the location of Monte Benei site.
The flint had an average-to-high quality, reaching excellence in the case of the transparent-white specimen, which had a very low number of inclusions, in some cases completely absent. It can be reasonably assumed that this flint was inserted within a sailing by sight sea route: in front of the site of Porto Alabe there is indeed a small bay, characterized by the presence of a wide stretch of beach that can serve as an easy landing for small cabotage boats.

Obsidian, the widely prevalent raw material, of which 17 tools were made – 3 leafed bifacials, 3 pedunculate winged tips, 4 side scrapers, 4 blades, a flake and 2 worn-out cores – originated in Monte Arci. It can be found in primary depositions, but especially displaced by erosive processes, both along the western and southern slopes (compositional variety respectively, SB1, SB2 and SA) and along the eastern one (SC variety; Lugliè 2004:47-60). The intense erosion has caused the dismantling of the alluvial fans that extend towards Marrubiu and Uras, causing a much wider dispersion of raw material: well floated obsidian nodules, with diameters up to 25 cm and evolved cortical areas, appear in the river sections even at a depth of 1 meter and are present in the skeleton of ancient alluvial terraces carved by the palaeo-riverbeds of Rio Mogoro and Riu Mannu (Lugliè 2004:47-60). The 'obsidian route' from Monte Arci to Capo Mannu was essentially a land route that crossed the northern portion of the Campidano plain and through which raw material came in the form of half-processed cores.

The typological analysis of the studied finds and the similarities noticed with materials found in other sites of the investigated area, allow the attribution of the analysed sample mainly to the Ozieri culture and partly to the Sub Ozieri one. For the general chronological attribution, both the “necked” and “simple based” axes and the obsidian bifacial (n.1) proved to be particularly important. Regarding the mace heads, most of the published comparisons are related to materials attributable to the Nuragic phase, between Middle Bronze Age and Early Iron Age. Nevertheless, their attribution to Neo-Eneolithic phases cannot be excluded.

Some of the raw materials used for tool production, such as flint and trachytic phonolite, come from areas relatively close to Capo Mannu. The phonolite is uniformly distributed in the northern part of Montiferru, whilst it is almost entirely absent in the southern part, except for an appendix on the south-western slope, 10.5 km away from Capo Mannu as the crow flies. The easy retrieval of this raw material by the prehistoric communities of Capo Mannu can be related to the almost exclusive use of this raw material for the production of roughly-knapped axes (found during the 80s and 90s excavations and surveys - Maffezzoli in prep.).

Regarding flint, the distance between the outcrop located on the hills behind the village of Porto Alabe and the area of Capo Mannu, approximately 25 km, is comparatively shorter if crossed by sea, also considering the convenient landing in the proximity of the outcrop. The overland route is made more difficult by the Planargia geomorphological characteristics. It could be hypothesized that the circulation of this Planargia flint fits into the sea routes of Monte Arci’s obsidian (Tykot 2004:118-32).

Lastly, the distance between Monti Arci and the area of Capo Mannu, approximately 18 km, would suggest the land transport of obsidian, made easier by the relatively simple morphology of the territory and by the presence of numerous sheets of water exploitable as communication routes throughout the year (Stagno di Cabras).
REFERENCES